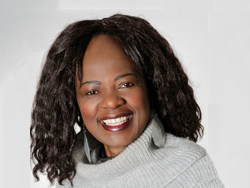 Lucy Oyubo Osterwalder, she’s been living in Switzerland for the past 13yrs. She loves languages and considers that her calling. She’s multilingual or as we would say, she has a light tongue some of the languages in her repertoire include German, English, Spanish, French und Swahili. She has been working as a translator and taught Swahili at the University in Basel.With the help of Crescenda an organization in Basel that works with migrants, she started her school, Hakuna Matata Language Center in May 2012. This is actually not her first language school in Switzerland having started the first one, the Lakeside English Center, run it for 7yrs in the eastern part of the country before moving on.

From her website, it’s evident that she enjoys what she does and her students enjoy it just as much. A review posted by one of those who know her says: “Lucy Oyubo is a very dedicated teacher who enjoys helping students understand Swahili, understand the people who use this language and also understand the culture that brought forth this fascinating language.” Brigitte Koller, Teacher

Below is an interview where she talks about her new language school, some of the challenges she faced as a migrant in Switzerland and her plans for the future.

Failing your way to Success