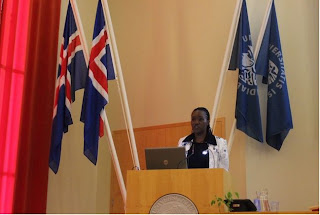 Pacifica F. Achieng’ Ogola, is the first African to ever receive a doctorate from a university in Iceland. Pacifica received her title mid February from the department of Environmental Studies and Natural Resources.

Pacifica was born in 1970 in Kisumu and received her Bachelors degree in Geography and Masters in Environmental Science from the Kenyatta University. She first came to Iceland in 2004 for a 6-month exchange program about Geothermal power sponsored by the UN. She returned in 2009 to pursue her PhD. She defended her thesis titled “Power to change: The use of geothermal energy to increase the quality of life as well as the adaptation and mitigation of climate change” (ie The power to change: creating Lifeline-adaptation and mitigation opportunities through geothermal energy utilizations)” in February at the University of Iceland. 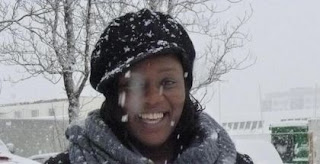 In her research, she investigated the possible effects of the utilization of geothermal energy in community development, sustainability and adaptation to climate change within the framework of the Millennium development goals (MDGs) in two regions in Great Rift Valley in Kenya (Marigat and POKO East region within the Baringo-lowland).

Study reveals potential benefits of utilizing geothermal resources in Baringo and can be useful in planning for both investors and companies considering geothermal related projects.