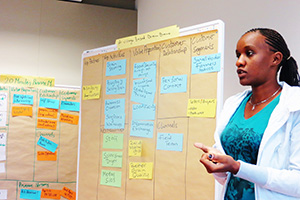 The young Kenyan, Irene Njeri Githinji, from the Nairobi University has won the Swiss competition that was held to bring together different ideas on fighting food losses and food waste.The young lady who has been in Switzerland for the last leg of the competition this month, won the first place for the: “The best idea fighting post harvest losses in developing countries” category. Her idea on focused on setting up a  village based “grain bank” – a facility offering quality grain handling and storing services to rural small holder farmers in Kenya.

The competition attracted 54 applicants from 14 countries with only 3 walking away with the awards and eight making it to the finalists’ Boot Camp.

You can read more about the project and the participants at Our Common Food.