A study published by the Organization for Economic Cooperation and Development (OECD) shows that the tax burden in Germany is still above the OECD average, but not close to what the Belgians are paying.

The study also shows that in 2015, the tax burden on labor income increased minimally through taxes and social security, and reduction in government grants.

Single employees with no children, paid up 49.4 percent of their income in taxes. However, of the 34 OECD countries, Germany is ranked the third highest place in terms of taxation. It is only in Belgium and Austria, where tax for average earners surpasses that of Germany, with recorded tax of 55.30% and 49.5% respectively.

In 2014 alone, the tax figures in Germany stood at 49.3 percent of labor costs (gross earnings plus employers’ social contributions). In 2000, the tax remits were at 52.9 percent. Across the OECD countries the average load decreased in this period from 36.6 to 35.9 percent. 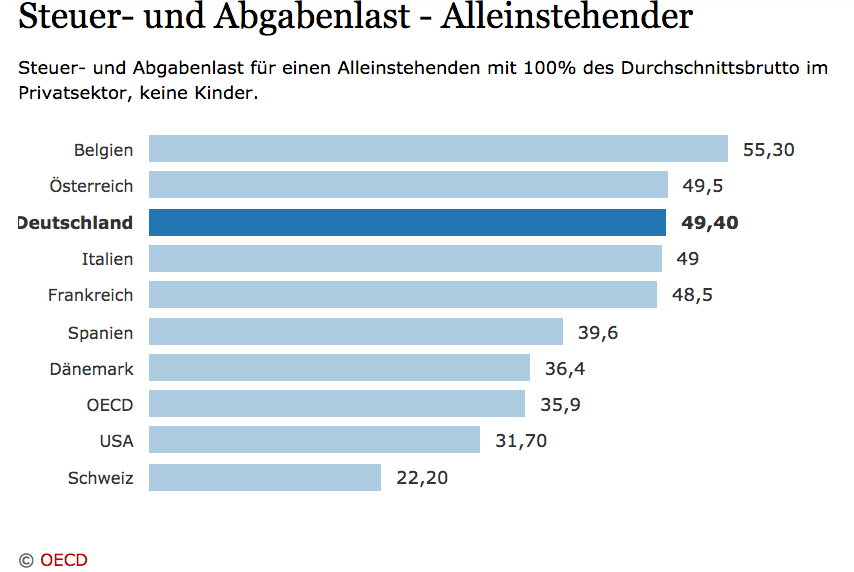 Experts have criticized Germany tax rules for two income families with policies like the “Ehegattensplitting” (one spouse ends up paying higher taxes than the other) and “beitragsfreie Versicherung von nichterwerbstätigen” (working spouses end up paying insurance for the spouse staying at home).

A reduction in job incentives has also been singled out as leading to the high tax burden. Apart from Belgium, the tax burden in Germany for the Zweitverdiener is higher than all other OECD countries.

The OECD comparison indicates that high taxes for the Zweitverdiener discourage women to get employment. The OECD Director for Tax Policy Pascal Saint-Amans argues that when designing the control system, more emphasis ought to be placed on the equality between men and women, adding that in any case, the tax system should not exacerbate existing inequalities.

In its latest economic report, the OECD Germany suggested that the tax burden on the Zweitverdiener earner can be reduced through a separate allowance. At the same time, the organization indicated that health insurance contributions could be calculated based on the number of insured adults.

Financing studies/Ausbildung through BAB and BAFÖG

Ranking of most Ausbildung jobs in 2012

Job Vacancy at the Consulate in Mombasa