A Kenyan teen was found dead on Monday this week in Augsburg after falling into a canal in Augsburg.

Earlier this month, Isaac Eddie Waithaka Heinzelmann moved from his home town in Freudenstadt in South West Germany to go look for work in Augsburg where his Uncle lives. His search had bore fruit and was to start work Tuesday this week.

Friday night while out on a drinking spree with a friend to celebrate, he fell into a water canal.

The friend called the police at 2am on Saturday morning to report that Isaac had fallen into the canal. Search teams were put together, with divers and sniffer dogs. The search didn’t bare much fruit on the two days but on Monday, divers were able to find his body three meters deep. The police couldn’t confirm if where the body was found was also the same place Isaac had fallen into, it is possible he might have been moved by the strong wave and water currents in the canal.

The death that came to a shock to both family and friends has gotten many sending their heartfelt condolences via Facebook. His friends from Freudenstadt went on Facebook to pass their regards and even declare they would have jumped him to save him, had they been there on that fateful night. 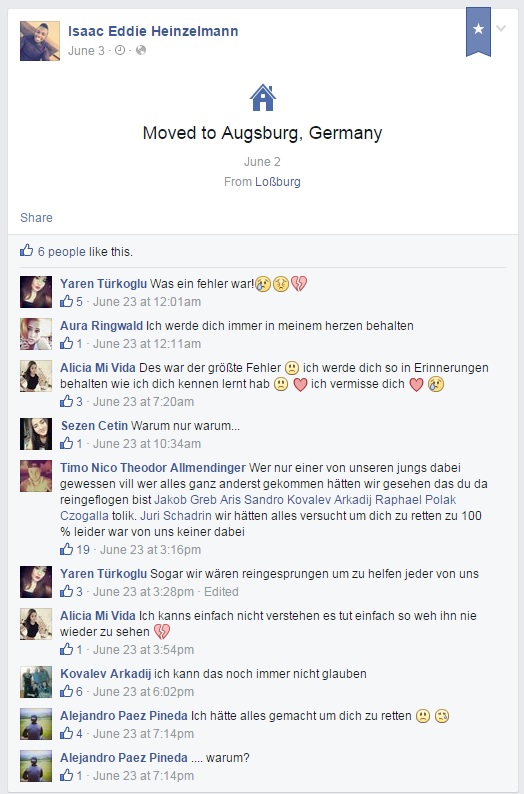 The 19 year old leave behind his parents Joan Njambi and Heinz Heinzelmann of Freudenstadt, his siblings: Caroline, Kevin, Willy Justin and Eric. His aunt Doris Wambui Finkbeiner  and cousins Belinda Finkbeiner, Mercy Seyfried and Ruth Seyfried among others.

Those willing to be with the family during this trying time either financially or even just supporting them emotionally and with prayers can do so.

Those who would like to send money to the family can do so to:

Friends will be meeting as follows: