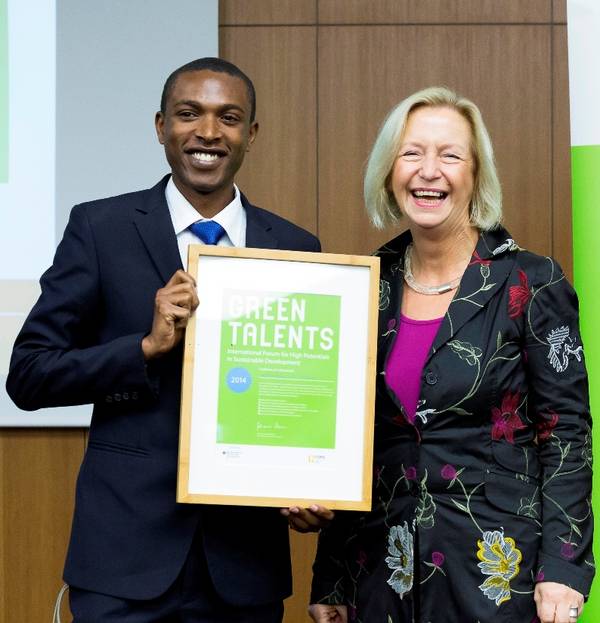 A young Kenyan scientist, Kennedy Mbeva, was awarded the Green Talents 2014 Award earlier this month at a festive event held at the new Federal Ministry of Education and Research Building in Berlin.

The Kenyan, currently undertaking a Master’s course in Beijing, China, was awarded for his enthusiastic activism and his clear vision of the practical applicability of his research to improving sustainable development in the future.

Kenneth was among 25 other young researchers named “Green Talents 2014“. This was the sixth edition of this award under the patronage of the ministry. There were a record 800 applications from 100 countries handed in for the competition this year.

The award was handed over to the young research by the German Federal Minister for Education and Research, Prof. Johanna Wanka. In her speech, she stressed the importance of the initiative for future international science cooperation:

“I note with great pleasure that over the years there has not only been a steady increase in the number of prize-winners but also in the amount of attention received and the international renown of the Green Talents Programme. In the meantime, this award is an internationally recognized prize for young researchers in the field of sustainability research.

The global sustainability goals can only be achieved through scientific cooperation and the exchange of knowledge. This calls for personal meetings between young scientists across national borders. Therefore I warmly welcome this year’s Green Talents in Germany.”

The awardees were invited to participate in the two-week “Green Talents – International Forum for High Potentials in Sustainable Development”, during which they visited top locations for sustainability research in Germany. Here, they gained a deeper insight into the country’s innovation system, learned about state-of-the-art approaches and technologies, and exchanged ideas with the country’s leading experts in individual meetings.