She arrived in Frankfurt from Nairobi then life took her to Mannheim, then Munich and finally Cologne.

Joyce Wanjiku Kairu was convinced to come to Germany to join college, together with some friends, they made arrangements to move. On arriving at the airport in Frankfurt, she met a German lady who was waiting for her. They went home together, the German lady drugged Joyce in the pretence of feeding her. Joyce was locked into the basement without her identification documents and no access to the outside world.

She was allowed to go to a language school to learn German, but only for a short time. Her host informed her that she had 3 choices: to become a prostitute on the streets; enter a brothel or agree to be sold to some old man. She chose the last and was sold to an old Metzger. Luckily the man was patient and she got time to plan her escape. 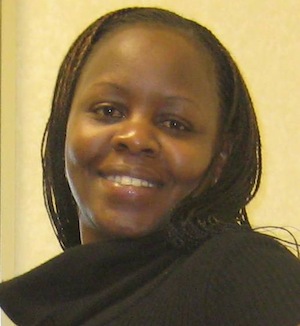 She got in touch with a family friend from her village who invited her to live with her family in Munich. Joyce  escaped from her “owner’s” house in Mannheim to Munich. She lived with the Kenyan-German family and worked as a house girl for them.

Her sister in Kenya advised her to move in with a friend, Mbugua, in Cologne who was to “hook her up”. When she arrived in Cologne, Mbugua was nowhere to be seen but there was a German lady waiting for her. The story soon changed from her coming to finally realise her dreams into her being advised to “wise up” and get into the market. She soon escaped from this German and met up with Kenyans who had been living in Cologne. A certain Jane, was quick to advise her that that was the only kind of business she could get into, they had already learnt and accepted the state of affairs and it would be wise for Joyce to do the same.

She ran away again and lived on the streets. She became a petty thief, stealing from stores.

Finally, Jane planned for Joyce to sleep with some old man. When Joyce refused they confiscated her passport, but she only found out when she was at the train station planning to return home. She went back for her documents and it turned into a fight. Like the true Nyeri woman, she beat the guy a good one. They had to go to hospital, consequently a court process was started and Joyce eventually returned to Kenya.

I love this interview for many reasons,

1. this is a lady I love and respect a lot. Remember I wrote about her work with the elderly in Nyeri under Purity Elderly Care Foundation.

2. She discusses a lot of issues most of us, yes Kenyans in Germany, know about. Be it the being duped, you came here planning to go to school only to land in the wrong place. Be it being turned into a house girl by “friends”. Be it bad advice from friends who tell you, “That’s how stuff works around here. We also cried and we got used to it, now let’s teach you how it goes”.

Lessons I’ve learnt from this:

By the way if you live in Cologne, you’re called Jane and you were in Germany as early as 1997…….hehehe, this is a good time as any to either move to another city or change your name cause now all Kenyans know what you do for a living.

The initial interview on AMLive on NTV was taken down, but Joyce gave another interview this week on Alfajiri on K24, see below: