Finding a kita in some towns can be dramatic. In some towns you need to confirm you will get a spot before you even try to get pregnant, while in others there are so many kit as without children that they even offer a bonus to parents who bring more children.  Regardless of which side of this divide you fall under, you need to find out what your child is being taught and what approach the Kita uses in teaching your child.

You can have your child join a kita from a few months old to 5 years. However, some Kitas refuse to take children younger than a certain age. All however accept children older than 3 years. 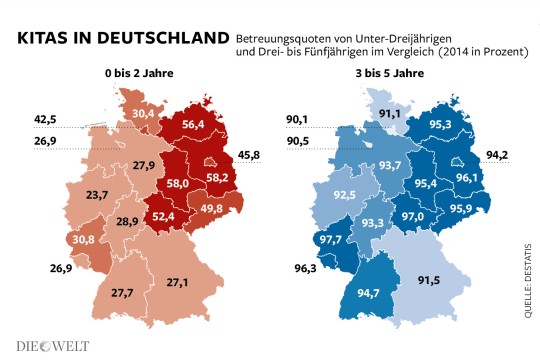 Most kitas also double up as Kindergartens, so whichever kita you choose, it most probably also has its own Kindergarten. However, there are also some Kitas that are attached to a Tagesmütter and therefore have no Kindergarten, you might also want to confirm this before you enrol your child.

Some Kitas are run by the state or by private institutions or private individuals. The state-run Kitas tend to be the cheapest while those run by private individuals are the most expensive. In the middle are the Kitas run by large organisations like Diakonie, Caritas or by Vereins in the area where they are located. 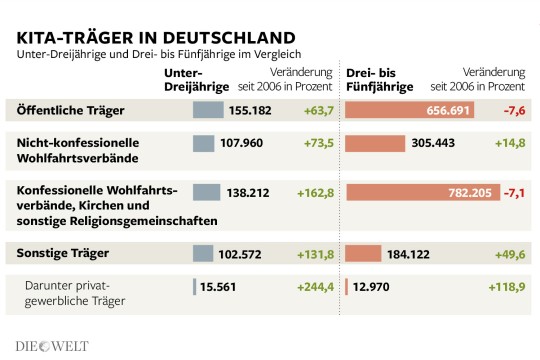 You might want to find out what role religion plays in the chosen Kita before enrolling your child. Some Kitas use bible stories or stories from the Quran in their teaching methods. If you don’t want your child being taught to follow any religion, you might want to choose a secular Kita instead.

How many languages would you want your child to grow up with? Depending on the kita, there are many that offer traditional German while others have decides to incorporate other European languages like French, Danish, English or even Turkish. 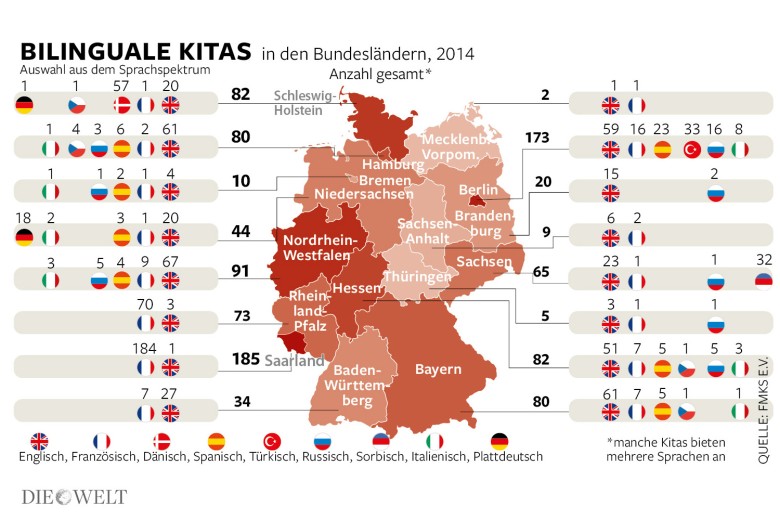 The Montessori education system calls for free activity within an educational environment tailored to basic human characteristics, to the specific characteristics of children at different ages, and to the individual personalities of each child. The learning materials tend to be tangible and made from everyday materials like numbers or letters made of sand paper, or world maps made of puzzle pieces for the countries or continents.

This method was developed by Maria Montessori, an Italian teacher.

You might know this from back home albeit imported from Germany. Children primarily learn through empathy, imitating their environment and creative play. Oral language is developed with songs, poems, movement games and daily stories. Aids to development via play generally consist of simple materials drawn from natural sources that can be transformed imaginatively to fit a wide variety of purposes. It also discourage pupils’ use of electronic media such as television and computers

This was developed by Rudolf Steiner, an Austrian philosopher.

A Plattdeutsch Kita actually belongs to the bilingual kindergartens, because Plattdeutsch or Niederdeutsch, is not considered a dialect, but a language. Some teachers at the kita speak in Plattdeutsch with the children, sing songs and read to them in Plattdeutsch. Most daycare centers that offer Plattdeutsch, can be found in northern Germany, for example  the Kita Constantia in Emden.

Unlike the traditional Kita or Kindergarten that is found in a building, this one is located in the forest. The children learn the different types of plants and animals and get to know how to deal with nature. They are primarily found outdoors, play with what they find in nature and move around a lot. This is to strengthen their immune system and raise awareness in them for nature. According to Federation of Nature and Forest Kindergartens in Germany (Bundesverband der Natur- und Waldkindergärten in Deutschland), there are currently about 1,500 facilities.

Here, disabled and non-disabled children are cared for together and to develop according to their abilities. The children learn from the outset how to interact with each other. Most educators or more employees work in integrative Kita than in a regular kita. Additionally, movement and speech therapy are offered. In fairness, the children don’t do everything together but are grouped differently for some activities e.g. running or educational games.

This is named after its founder, Friedrich Wilhelm August Fröbel, who created the concept of the “kindergarten” and also coined the word. This education model focuses on the child recognising that children have unique needs and capabilities. Each institution can set a different focus, such as bilingual education, or science.

There are currently 130 such Kindergartens with about 12000 children.

Why Schools in Bayern are Better than Those in NRW

Mkenya Radio June 2014: The Role of our African culture in the Diaspora

Choosing an International School in Germany

Apply for the German-African Media Camp 2014