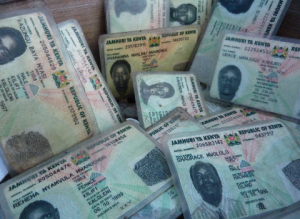 Last week the Bundesrat (Federal Council) passed the law allowing children born in Germany to hold dual citizenship for life. (Germany allows dual citizenship for children). This in turn means that Kenyan-German children can take up Kenyan and German citizenship at birth. Unlike before where they had to make a choice between the two by their 23rd birth year, they will now be allowed to keep both for the rest of their lives.

However, the Kenyan bureaucracy seems to push many of these children away from remaining Kenyan.

If you are over 18 and living outside Kenya, you cannot have your passport renewed via the Embassy if you don’t have a valid Kenyan Identity card.

This might sound simple, until you look into the process. Other than the high commission in the UK and the Embassy in Washington DC, Kenyan Embassies do not issue identity cards. Therefore, if your passport expires and you don’t have a Kenyan identity card, your passport cannot be renewed.

Some children were born in Germany and have lived here all their life, only visiting Kenya for a few days annually. In such a case, you can’t send such a “child” to Kenya to apply for the ID themselves. This means you have to go to Kenya with them. For the single parents who have other children, it means you have to travel with the whole family just to apply for an ID and we all know that IDs in Kenya take at least 8 weeks to be issued.

If you are applying for a new passport for your child born in Germany, you need to name a “recommender” for that passport to be issued. The person recommending has to be a Kenyan but shouldn’t be the parent. Why do you need to be recommended for your government to recognise you? Aren’t birth certificates and the parents’ word enough for a child to be considered Kenyan? How does the “recommender’s” word hold more weight in such a matter?

With the new dual citizenship laws, it means there will be more of our children holding both passports. According to the last census, 20% of Kenyans living in Germany are aged below 18, that is approximately 3000 Kenyans. This is a huge number of Kenyans being denied their right as citizens.

If the Kenyan government and consequently the Kenyan embassies want to enable the next generation of Kenyan-Germans to remain Kenyans, these rules have to be reviewed. To be honest, most people will prefer to drop the Kenyan passport and subsequently Kenyan citizenship to overcome these hurdles.

It is time our government encouraged and made it attractive to hold Kenyan citizenship. Patriotism is great but if you keep being treated as a second class citizen even where you are from, it becomes a real hustle. As a Kenyan who takes up German citizenship for example, it is sometimes easier to apply for a new German passport while in Nairobi than to apply for a Kenyan one despite being in Kenya. Does that even make sense?

Why should an embassy be quicker to serve foreigners than it serves its own countrymen and women?

Kenyan Embassies argue that they are mainly set up to encourage trade and partnership with their host countries, thus serving their citizens takes a back seat. However, do you think the British High Commission or even the German Embassy in Nairobi would treat Kenyans better than they treat their own citizens in Kenya?

The essence of this is to request the government to bring services closer to the people. If the government has the resources which of course they do, let them equip the Embassy in Berlin to issue Identity cards or allow the High Commission in London to issue identity cards to all Kenyans in Europe (you currently need an address in the UK to apply for the ID) or allow Kenyans to apply for the Identity cards via the Embassy in Berlin (embassy doesn’t handle ID applications). Forcing people to travel to Kenya to apply for an ID is quite tedious and analog for a digital government.

In this day and age of high speed internet and fibre optics, it shouldn’t be that complicated to allow Kenyans living in Europe to apply for an ID via the Embassy.

Holders of Old Kenyan Passport to be Barred from Travelling

No Visa Fees for Children Under 16 Entering Kenya