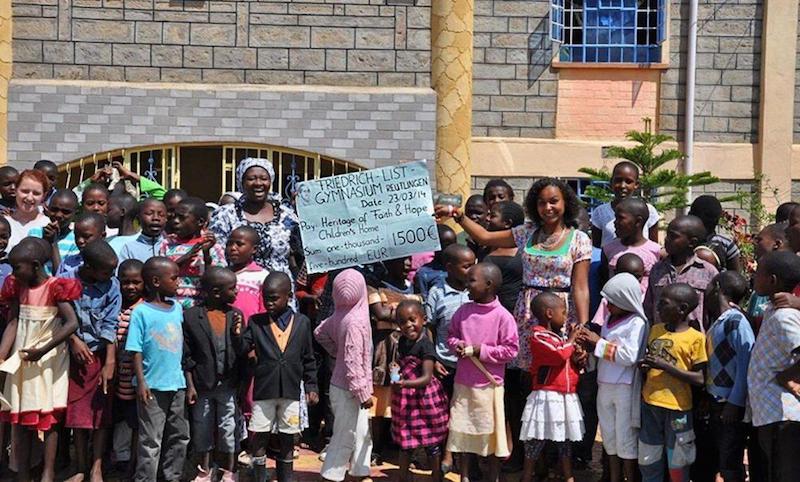 It’s encouraging to see young people give back to society and care for the less privileged, more so when it’s a second generation Kenyan-German born and raised in Germany, going to help out in Kenya.

This amazing girl, Imani Reiser, just graduated from her Gymnasium in 2013 and took a year off to go help out in Kenya.

Imani who attended the Friedrich-List-Gymnasium in Reutlingen, organised her class of 2013 to raise funds for social work. The whole class of 107 pupils came together with amazing activities from parties, to selling the year book and having a Prom, where they raised €4000.

The group agreed to send half the amount to Typhoon victims in the Philippines while the other half would go to Kenya. In Kenya the money was donated to the Heritage of Faith and Hope Children’s Home and Mama Tunza Children’s Centre. Two thirds of the amount would go into paying school fees for the orphans in the homes while the remaining amount would go into planting fruit trees and starting a tree nursery.

To ensure that the donations were also used for the exact reason they were meant for, Imani took a year off to volunteer at the Heritage of Faith and Hope Children’s Home they funded. During her year in Kenya, she’ll also be travelling and getting to know her “motherland”. Interested in her adventures in Kenya? She’s also been to Uganda, read about all that at: Imani Time. You can start by reading the progress of the whole project here: Project Fruit Trees: Blooming Donation.

If she looks familiar and you’re wondering where you know her from, may be it’s because she resembles her mum to the tee. She’s the daughter to the entrepreneur extra-ordinaire, Njeri Kinyanjui of Reutlingen who owns Hottpott Saucenmanufaktur, a company that specialises in sauces and chutneys. Read about her here: Adding Flavour to Germany with African Chutneys and Sauces.