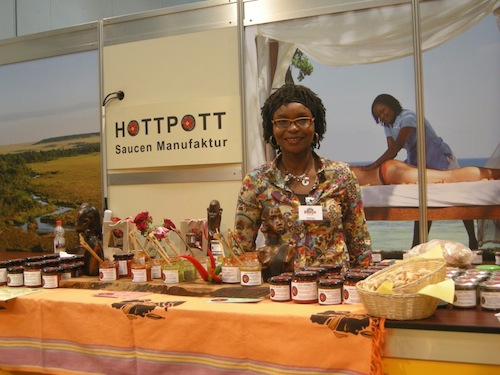 She came to Germany in 1983 to study in Berlin. She completed her studies in 1992 in Tübingen with a Diplom in Volkswirt (Economics) before getting married and having two kids, who’re now adults. She worked for several years in Freiburg and Reutlingen before eventually stumbling back to her first love, putting African tastes in a jar.

Since her time in high school in Kenya, when she would create sauces and other niceties in jars to carry to her boarding school to spice up her food, to making sauces to spice up the Mensa food during her time at the Uni in Berlin, creating new sauces and putting them in a jar has always been something she loved. She now lives in Reutlingen where she started her company Hottpott Sauces. The company was started in 2009.

Her company that began with only sauces and chutney has grown to include jams and even cooking classes. An adventurous soul, she’s always trying to mix up new daring recipes which tend to come out perfectly. She’s collected recipes from all over the world and twicked them to add her own touch, adding spices from all over the continent. The names of her sauces are always interesting, ranging from “Sina Makosa” to “Salsa Hasira”.

To get in touch with her:

Make Traction to Move Closer to your Goal

Who are the Most Innovative?

Siemens Stiftung Expands its Program for Micro-Entrepreneurs in Kenya

German Medical Device Manufacturer to Set up Plant in Kenya

Support for Graduates Returning to Kenya