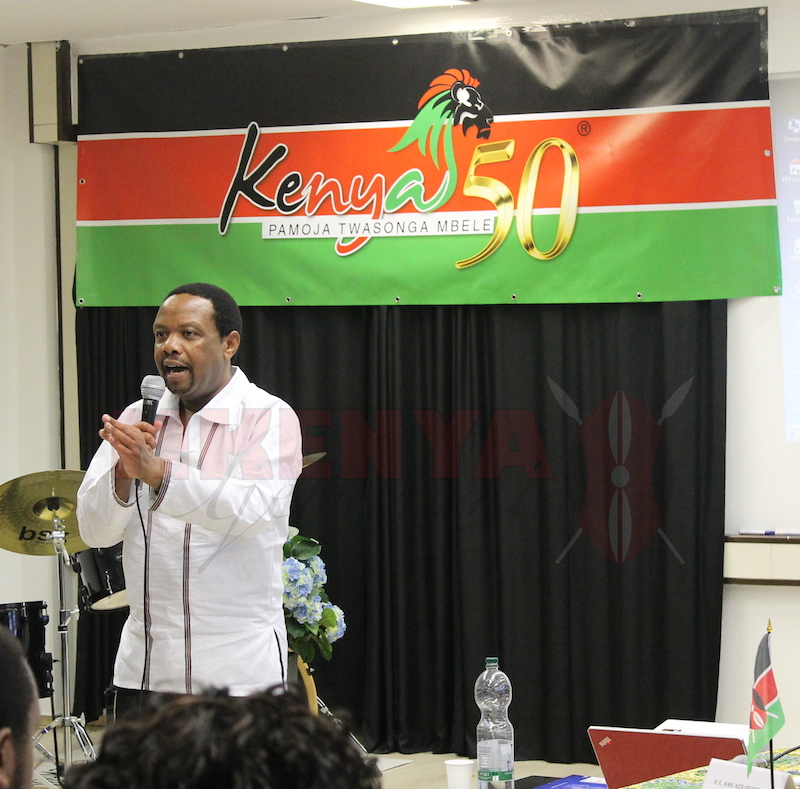 This must have been the best attended Kenyan event in Germany. Kenyans came in their numbers from across Germany, to Frankfurt to celebrate 50 years of Independence.

Kenyan organisations and business owners were there to advertise their ventures and to share tips with the attendees. The event started with singing, dancing and prayers by the Mt. Hebron Ministries team led by Pastor Jane Hessner.

The Kenyan Ambassador to Germany, H.E. Ken Osinde, gave the opening speech and moderated the event. 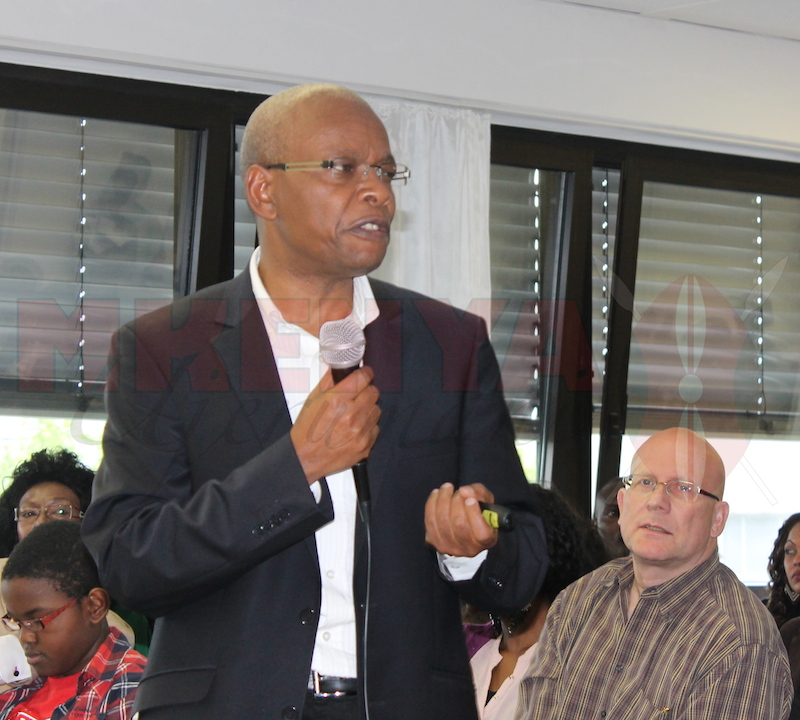 The guest of honour, Prof. Gituro Wainaina, the acting Director General of VISION 2030, gave the keynote speech. He spoke of the various investment opportunities made available to Kenyans by the VISION 2030 roadmap. His presentation also included some success stories of Kenyans who’d made it in some of these new fields for example an IDP who was given $1,50 after losing her home; she used 50¢ to buy flour that she used to make porridge to sell at a construction site. That was 2008, six years down the line, she is employing 10 people. Another was a gentleman that quit his training as a doctor to become a farmer with an income of KSh. 3million monthly.

There were soooooo many amazing speakers at the event, each with something amazing to share.

I loved Elizabeth Horlemann’s comment: “I have a disability but that is your problem and not mine, I’m moving forward“. Most of us still need to work on how we react to people with disabilities and also including them in our planning. Elizabeth mentioned that briefly as well. We shouldn’t stare at them, neither should we forget to consider them when choosing a location for an event.

Halima, a volunteer from Solwodi had an intervention, urging us to seek help regardless of our status. Most organisations in Germany will offer help without necessarily looking into your legal status here in Germany.

Dr. Elly, a Laparoscopic surgeon, gave a talk on Professionals in Germany. His presentation was amazing. He also brought a topic to light that many shy from, tribalism in the diaspora. “As a diasporan, we should remember we only have one tribe and that is Kenyan; this habit of having “Kikuyus in Germany” as a Facebook group is retrogressive and doesn’t help us move forward in any way“. He was also quick to encourage us to be confident; shun inferiority complex and get comfortable where we are. 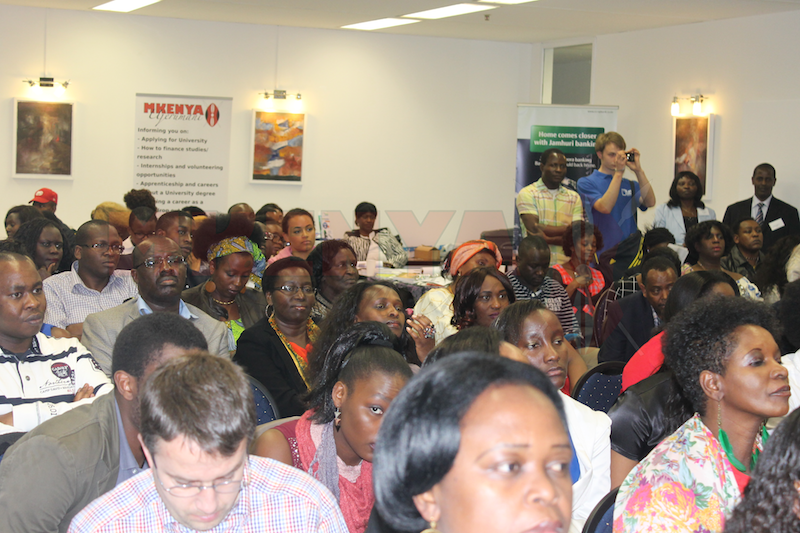 Prof. K’Orinda, spoke on the petty politics most Kenyans are prone to. We start organisations only to fight over positions, or refusing to work with some people because they are from other tribes. “It’s wrong to insist on being the leader yet you aren’t the best. If everyone is a King, who will they lead? Let’s learn to allow ourselves to be led by the best, it’s the only way we can move forward. We have to be united.” Her analogy on how we were colonised by a small group of people based on their strategy and unity, hit close to home.

Dr. Garnet from the UK, spoke briefly on managing stress. Although the presentation was definitely to the point, it focused a lot on “professional stress” (stress in the office). I wish we would have been able to get some concrete places where people should get help, if the stress becomes too much as well as discuss how to manage other forms of stress that we encounter as diasporans.

Pinnoh, performed a poem on FGM. She also offered to send me that beautiful coat. Hint hint.

The message from all the speakers was pretty similar with most encouraging us to speak out for ourselves and do our homework as we fight to “make it” in this country. Jaymo Ngubiri from Equity and Co-op Bank Kenya, hinted on an upcoming Sacco for Kenyans in Germany. Mohammend from the UK also introduced his shipping business that he plans to expand into Germany, he also offered to work with anyone interested in joining him in the venture. Sydney from OKSH, spoke on applying for hostels and jobs/internships for students; he also invited professionals and students to attend their upcoming networking event to be held in Frankfurt.

The event was amazing, we all got an opportunity to network and mingle. I enjoyed meeting Mkenya readers; people I’ve featured here on Mkenya and people I have been planning to feature. It was nice for some to discover I actually know them, yet we’ve never met. LOL….seems I’m the NSA/Big Brother for Kenyans in Germany…..I’m watching you.

Ohhh, and some Kenyan habits die hard…..like the people who were not scheduled to speak and they request for 2mins to say something brief and they end up speaking for 20, or those that request to ask a question only to end up giving stories and not asking a single question. Hehehe, and did I mention those that request to speak only to use their time to tell us how they know everyone in the room. Although they are irritating, at least they remind us that you can take a Kenyan from Kenya but even after teaching them German and freezing them during winter, they remain Kenyan to the core…..”Kwa Hayo Machache, or I didn’t have much to say” #Tunajivunia #Tunajihurumia #PeculiarKenyanHabits

And then there was cake, scrumptuous and very tasty. That was beginning of drama… 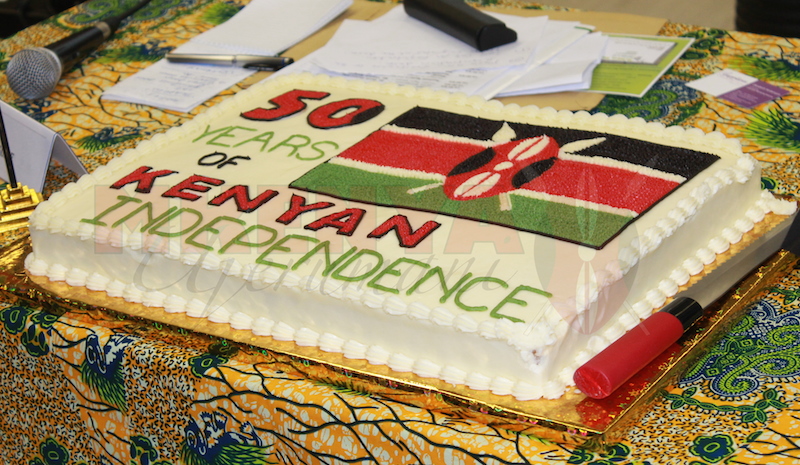 Let me tell you the story about this cake. Sasa, they brought the cake while the Ambassador was winding up. My eyes couldn’t focus on anything else, I actually missed the last part of the Ambassador’s closing remarks. Now, drama started when Mr. Konje, the commercial attaché, was asking people to keep quiet and listen to the song performed by a group that was there. The group, shown below, performed the song by Eric Wainaina, and as I was singing along, I glanced towards where the cake was and it was GONE. Sema heart attack…gosh, I think I was about to cry. I looked at the Ambassador so shocked, and I could only whisper: “Cake”. He told me they had gone to cut it and would bring the smaller pieces. Haaa, my heart finally returned to its position when I saw the cake at the dinner table……. mad respect to whoever baked it, I loved it….. 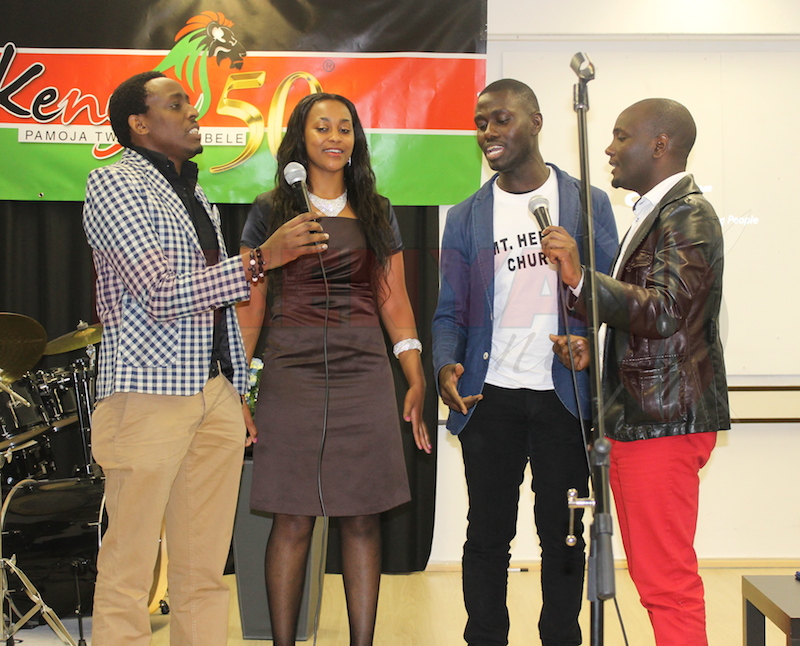 Kenyan at the Helm of a Million Euro Production

When Professors Prank Their Students