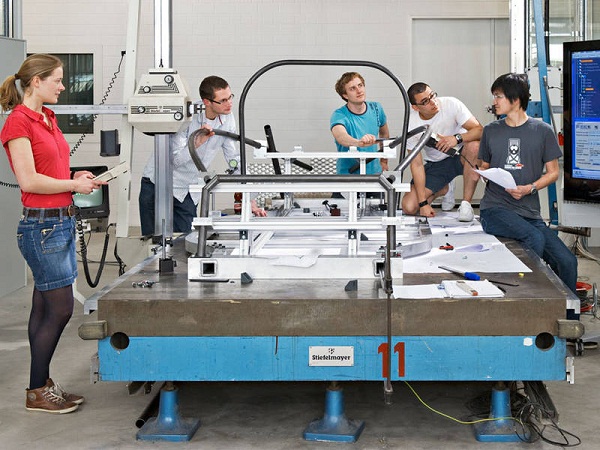 1) You can be the apprentice

Germany has one of the lowest youth unemployment rates in Europe. A major factor behind this is its much-lauded apprenticeship scheme, which offers a dual programme of training alongside education for numerous vocations, including carpentry, plumbing and car mechanics. Foreign EU citizens are also eligible for these apprenticeships and their chances of getting on one are higher than ever due to an excess of places.

2) You can put your foot down

Many of Germany’s motorways have no speed limit, so you can step on it and put your car to the test. This is a rare treat for speedy US and UK drivers. If you prefer two wheels to four, Germany is also well geared for bicycles with lots of cycle paths – and lots of cyclists.

German bakeries are renowned worldwide. Although they don’t quite match French pâtisseries for cakes, bread-wise they offer an unbeatable and delicious range. From healthy seeded loaves to Schwarzbrot (rye bread) to Bretzels, there is more bread than you can shake a baguette at. And there is a plethora of different brötchen (bread rolls) – 1200 varieties according to the Tagesspiegel.

4) Bienenstich is a cake to move for

As an exception to my previous rule, there is one German cake to rival the French pâtisseries. Bienenstich or “bee sting cake” is made with sweet yeast dough, filled with a thick layer of cream and topped with a crunchy and buttery honey-almond caramel. This cake alone is a good enough reason to emigrate. Bienenstich won its name because it is said that when it was first made, a bee was drawn to its sweet topping and stung the baker

5) Sunday really is the Sabbath

Whether you like it or not, Sundays in Germany are a time to rest – or carry on drinking. It’s up to you. What you can’t do is shop – anywhere. The 1956 Ladenschlussgesetz still forbids it – but as of 2013 shops may open on designated Sundays throughout the year. Berlin, for example allows ten of these. Sleepy Sundays give you time to recuperate before the week ahead and you can feel guilt-free about doing absolutely nothing.

Workers in Germany have a good deal. According to 2012 figures from the OECD, they work fewer weekly hours than UK and US employees. Employment protection also ranks higher – especially compared to America, which in 2013 had the worst record for individual and collective dismissals on regular contracts. And if you are laid off, it’s not all bad news: workers in Germany are entitled to redundancy pay of a month’s wages for every year they’ve worked at the company.

Playgrounds in Germany are a cut above. Imaginatively designed, you will come across parks with large wooden climbing frames, giant spider’s webs and tilted spinning tops you can run on like a treadmill – much more exciting than the offering in most British parks. It is therefore unsurprising that German-designed playgrounds are in international demand.

8) There’s a club for every hobby

Germans take their hobbies seriously. On a sunny Saturday at Tempelhofer Feld, Berlin’s largest public park and former airport, people use every means possible to roll down the old runway – from roller skiing to recumbent cycling (cycling but lying down). But such pastimes are not just a personal pursuit. There are clubs (Vereine) for your hobbies – and lots of them. One such club is the German Slackline Association, the DSLV (see above).

The trains run on time, there are high speed rail connections between major cities and the Mitfahrgelegenheit (lift share) scheme allows you to travel long distances on a tight budget – and reduce your carbon footprint. The high speed ICE trains are particularly impressive. Not only can they travel at 330 km/h, they are also spacious, comfortable and invariably spotless.

10) You’ll look fashionable (compared to everyone else)

Yes Berliners can look ‘effortlessly’ cool, and yes Joachim Löw’s roll neck sweaters are pretty sharp, but there is too much leather on show and Jack Wolfskin jackets are not as stylish as Germans think. Contrary to popular belief in Germany, an anorak doesn’t make an outfit, it usually ruins it. If you make an effort with your clobber, you’ll probably be the coolest cat in town.