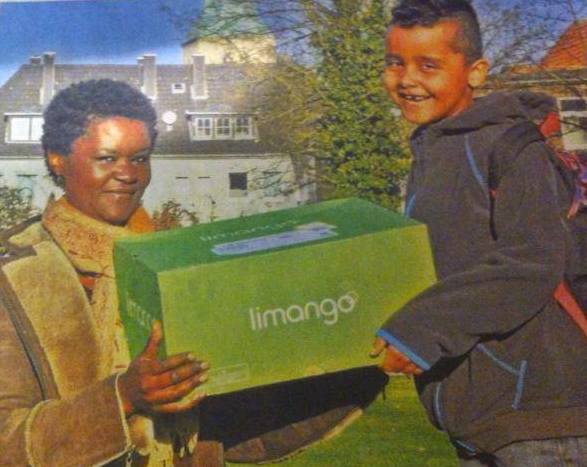 It’s Christmas time, and as always most of us are busy buying presents whether online or in the different shops. Coincidentally, when you order something online, you’ll stay home and wait for the parcel but immediately you leave the house even for 10mins, it’s delivered and you only find the note asking you to go pick the parcel at the post office 🙁

Joyce Nietiet, a Kenya had ordered shoes for her son, which were delivered on Monday last week when she wasn’t in the house. As soon as she was able to (Wednesday at 4pm), she went to the nearby shop where her parcel had been delivered to pick it up. She had the note left by the delivery guy and of course her ID, as is required. She made her way to the Hermes Shop on the Bochumerstraße in Dorsten, little did she know what awaited her.

The Kenyan who has lived in Germany for seventeen years and only six in Dorsten, found herself in the most uncomfortable situation since she arrived in Germany. The shop owner looked her straight in the eyes and informed her that she wouldn’t be given the parcel because, “She’s black”.

“We don’t issue parcels to black people”, the lady told her in a shop full of customers. Apparently none of the customers said a thing, apart from one old guy that told Joyce to stop making noise when Joyce started complaining of the statement being racist.

According to the lady, she had been told by one of the Hermes drivers that she should never give parcels to black people because there were too many cases of robbery of parcels involving black people; an excuse that is quite weird.

Angry at the lady’s response, Joyce called the police. The lady at the shop agreed to “make an exception” but not really to change the rule.

The Hermes spokesman, Martin Frommhold, denied the allegations and defended the company saying, “Hermes is an multicultural company, and we don’t accept discrimination of any group of people. We expect all our clients to be treated the same in at all our shops and partner shops as well”.

Hermes will decide what action to take against the lady of the shop. (According to one of the Mkenya sources, Hermes decided to cancel their contract with the shop.)

Today, Joyce will be expecting a visit from Hermes. According to Mr. Frommhold, they will bring Joyce a large bouquet of flowers as an apology.