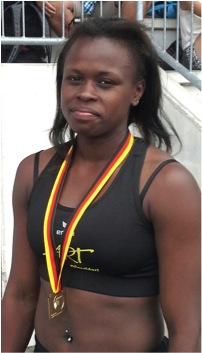 This girl is like a bullet, she sprints so fast that if you dare blink during her sprint, you might just completely miss it, that’s how fast she moves.

Ivy Otieno, is a 18 year old Kenyan student living in Düsseldorf. She was born in Kenya and only moved to Germany six years ago aged 12. She joined the Verein LG Remscheid before moving to ART Düsseldorf where she’s currently a member.

She’s currently the under 20 German Champion having taken the Gold medal at the last competitions. She’s won herself several gold medals and is known for her discipline and hard work.

Every time she wins any competition, most of the reporters will ask about her Kenyan citizenship and whether she would be interested in taking up German citizenship. Oya, where is the Kenyan government? They should give her a good enough offer that she doesn’t consider German citizenship. Kenya might need to learn how to diversify our medals so that we’re placing all our hope in the marathon runners. Ivy would be a great addition to the Kenyan Athletics team, only if the officials would spend their time searching for talent instead of spending all the time stealing the funding for it……

Anyhu, I wish Ivy the very best. She’s definitely going places regardless of which citizenship she holds. She’s a GREAT star.

The ART Düsseldorf (Allgemeiner Rather Turnverein Düsseldorf e. V.) has been around for over 100years training athletes and sports people around the area. Some of it’s famous members include Heiner Büssing, Uli Herbst, Jessie Maduka, an under 17 Olympian who looks up to Ivy for encouragement.