The new payment system comes into effect on 1st February 2014. Although the system was introduced in 2008, most people within the EU haven’t embraced it, especially the Germans. In Germany, most people only use the SEPA system when transferring money  outside Germany. As of 1st Feb, everyone shall be forced to use SEPA even if you’re transferring money within Germany.

Here are a few things you need to know about it.

How long can you use your old account number, after 1st Feb?

Everyone will be allowed to use their old account number for two years after 1st Feb 2014 i.e. until 1st Feb 2016, but only within Germany.

All bank account numbers will be extended to 22 digits from the usual 10digits.

One will have to enter the IBAN number when transferring money. The IBAN differs from one country to another: it ranges from 15digits in Norway to 31 digits in Malta; in Germany it has 22 digits.

International money transfer will be faster taking only a day (24hrs), it currently takes about 7days

Money transfer will be safer. In case one types in the wrong number when transferring money, the transfer will automatically be stopped.

What currency does SEPA work in?

It only works in Euros.

What is the IBAN?

IBAN stands for International Bank Account Number. It’s made of two letters from the country code, the verification code, the bank code and finally the account number.

Where do you find your IBAN?

It’s on all bank statements and on some ATM cards.

BIC stands for Bank Identification Code. It’s also known as the SWIFT-Code in some quarters. It contains no numbers only letters, it includes: the bank code, the country code, the regional code and the branch code. 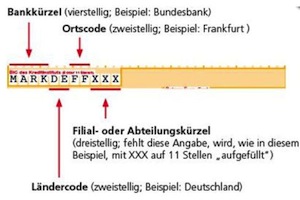