Someone remarked recently that the only Ausbildung Kenyans in Germany do is Altenpflege. First I don’t like stereotyping people because it tends to put everyone in the same basket and anyone outside that basket is considered “odd”, which isn’t the case. There are many Kenyan faces and the one I’m about to introduce to you is a chef…..you got that right, she did her Ausbildung to become a chef. 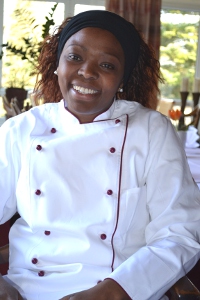 Meet Carol Mühlenbrock from Gahlen. She’s been in Germany since 2007 when she met her husband. When she moved here what shocked her most was the “cold” sun. In October when she moved here, she saw the sun shining through the window and dressed in a t-shirt ready to enjoy basking in the sun, only to come out and freeze.

On her arrival she took up intensive German classes at the Schulbank in Wesel where she learnt the language for 18months. “I wanted to learn how to speak the language without making any mistakes”, she explains why she undertook such an intensive approach. “I also wanted to understand the jokes my father in law, Johannes, kept telling me”, she adds smiling.

She had studied law in Kenya but hadn’t graduated. When she moved to Germany, she found out that she had to start from scratch. (Read about: Transfering to a German Uni from a Uni in Germany or Abroad). This didn’t worry her much though, she had already started working at a restaurant and she was enjoying her new job.

She passed her exam on 16th January this year and to top it off as the very best (Kammerbeste). 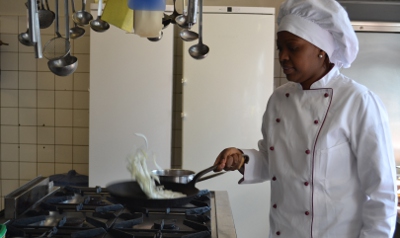 Although she enjoys living in Schermbeck and the punctuality, she still finds it exhausting engaging with the many offices and the fact that she could only use her Kenyan driving licence for only 6months then start from scratch to get a German one.

If you’d like to pass by and try her delicacies, she’s at the Hohes Ufer Restaurant in Schermbeck: http://www.hohesufer.de