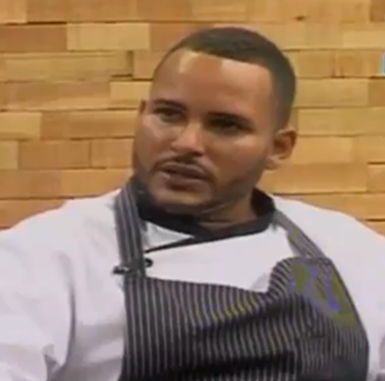 For many Kenyans in Germany who have decided to do an Ausbildung or study, they tend to take up courses they don’t enjoy simply because they are told they are the only ones open to foreigners. And due to this, I love showcasing Kenyans in Germany who have taken a bold step to take the road less travelled in Ausbildungen not many venture into. Here’s a Kenyan chef, who recently went back home and is using the “strange” ausbildung to make a living. If you follow your passion, you can make it anywhere….

He’s a friend to many Kenyans living in and around Stuttgart. He is half Kenyan, half Swiss but grew up in Germany. His name is Francis Muriuki or Chef Francis. He’s a chef extra-ordinare having worked in many big restaurants both in Kenya and in Germany. He did his koch Ausbildung in Germany before moving to Kenya shortly then returning to Germany again and now he is back in Kenya.

Did I also add that he’s eye candy? Yes he is, he’s very good to look at but he’s engaged 🙁

Watch him below as he makes breakfast with Shiela Mwanyigha on AM Live.

You can ogle at pictures of him and his fabulous food creations on his Facebook Page: Chef Francis Muriuki