The Local has been running a weekly column they call your German career and I thought I’d share this one article and if you’re interested you can read more from them. 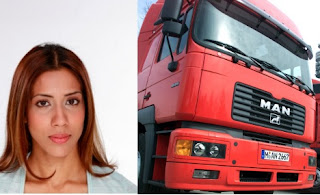 Originally from India, Tanya Singh Schober grew up in Dubai and got a double degree in management and marketing. After holding executive positions in the United States, Australia, Dubai, Britain, Serbia and India, she settled in Bavaria two and a half years ago and got a job working for truck maker MAN.

What brought you to Germany and how long have you been living here?
My German husband. We met in London two and half years ago when I was doing my MBA. He has a business in Donauwörth, which is about a 100 kilometres from Münich, so we decided to settle here.

How did you land your job here? Was it difficult for you at the beginning?

Professionally, I started in Germany from scratch. I didn’t know any German during my first year here. Even if you are a well-educated management professional, without a local network language can be a significant barrier in your professional career. I live in a small village which made my case a little more difficult in terms of finding professional opportunities in the vicinity. Certain industries here like aerospace and automotive industries are regulated by certain union regulations and laws, which if you’re a foreigner with limited local know-how and network to advise you, is a major challenge to navigate through.

I started out at an interim position at Eurocopter which was very different from my professional background. During my eight months there, I started looking for other opportunities. In December 2011, I started working at my current job at MAN Truck and Bus AG, which is now part of the Volkswagen group.

What exactly does your job involve?

I am a project manager, in charge of cooperation management between MAN and joint ventures in countries like India, Russia and China.

Germany is a very “specific” culture to live and work in. To be comfortable with certain aspects of this culture, one must simply be born here. By “specific” I mean that the focus is purely on engineering. As a profession, it is given top priority and paid accordingly as well. The Commonwealth countries are more diverse and open – you could be an editor, journalist or in any other profession, and have the flexibility and opportunity to make a strong management career while earning as much as an engineer or doctor. There is also the issue of gender bias, that is, opportunities for women in management.

Additionally, language is a bottleneck for many foreigners as it is used both officially and unofficially in both German and international companies. However, I do agree that when in a country other than one’s own, speaking the local language is important.

Did you speak any German when you started out at MAN?

I’d say my level of German proficiency then was medium. I could converse and do business in German, but even now, it’s still a work in progress.

Is it important for someone in your position to be able to speak the language?

Yes and no. If you want to integrate in terms of achieving results with your colleagues and managers and prove yourself as a good performer, German is important.

How long after you got the job at MAN did you land the managerial position?

After 14 months, in January 2013. I started out with an entry-level position. I was pregnant at the time and working full time. I only took the minimum maternity leave and came back to work in 12 weeks. I realized that in general in Germany, if a woman doesn’t come back to work quickly enough, her chances in the professional corporate world are limited. The situation is changing, though.

Have you faced any prejudice at the work place in Germany?

Foreigners here need to make a very strong effort in order to integrate and adapt. As far as prejudices are concerned, I haven’t openly experienced anything, although that may be because I haven’t been able to recognize it. I am constantly reminded of and appreciated for the fact that I’m in the minority as a working mother in a management position. There is a wide gap here in companies between the genders. Quite often, being a manager, I end up being the only woman among male colleagues.

What are the best and worst things about working in Germany?

The best part is that they’re very disciplined and structured. They really need you to perform and then your path is clearer. But to get to this stage, you have to work very hard. In the countries I have resided in prior to my arrival here, you find a higher, more integrated percentage of people from different cultures and diverse backgrounds. Therefore, the significance of the value added with diverse workforce is very high and highly welcomed. For the future, it would great to see Germany also embracing the many advantages of a diverse workforce.

Read more on Your German Career at the Local.
Share with friends:

Kenyan Finds a Job via Anonymous Application; Uses the Same Method to Employ Others

Ausbildung FAQ: What you Need to Know on Your First Day as an Azubi

Director of Kenya Seed NGO in Saarbrücken for Forum of MDGs