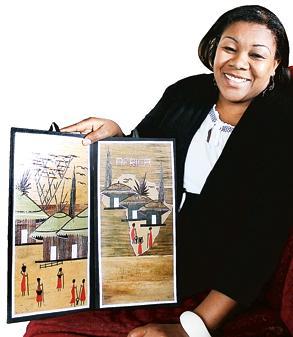 Born in 1969 in Eastern Kenya, Evelyn Lehnard left Kenya in 2006, looking for a better life in Germany.

Every year she visited home, she would carry clothes and toys to give to the less fortunate in her home town. In 2012, she decided to turn her philanthropic actions into an organisation. She started the Kenia Kinder Hilfe e.V. Oldenburg.

“My desire is to build an orphanage and to give children in rural areas access to education.”

Evelyn’s plan is to ensure that girls and boys in rural areas can get health insurance.

She trained at Kilimambogo Teachers Training College, where she got an Arts degree in English and Swahili. Unfortunately, her qualifications weren’t recognised.

The mother of 4, first moved to live with relatives and friends who lived in Oldenburg. While at a relative’s home, Ingo, her current husband came visiting.

She had left her children in Kenya, as she planned to get to know the area before bringing them to Germany to live with her. She was later able to bring all her four children, divorce her husband who continued to live in Kenya and marry Mr. Lehnard. Two of her children are grown and out of her house, but she still has two at home that she’s taking care of.

If you’re interested in joining her effort, you can find further details on her site: Kenia Kinder Hilfe e.V.