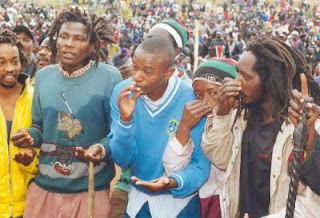 According to Kenyan newspapers and media outlets, he was reported dead during one of the crackdowns the police led against the sect in 2008-2009. Most of these media reported that the man was gunned down by the police. Many celebrated his death as he was known to be very ruthless.

Information revealed in Berlin proves these allegations wrong, with close sources revealing that the man fled to Germany at the time of the crackdown and has been living in Berlin ever since. When he landed here from Kenya he went straight to Berlin and applied for asylum with the newspaper cuttings from Kenya as evidence of his life being in danger if he went back to Kenya.
Unfortunately for the man who died in November last year, his asylum application hadn’t been approved at the time of his death. His body was sent back to Kenya for burial. Unlike many diasporans, there was no call for contributions to repatriate the remains as his family could afford it.

Those who knew about the story as reported in Kenya about the man’s death were in Berlin to actually prove that he was dead this time. One was caught saying, “At least this time he’s really dead with no chances of reappearing elsewhere”.

Kenyan Teen in ICU After Stabbing by Albanian Refugees