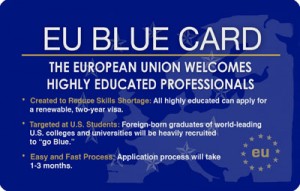 Apparently foreigners aren’t flocking German embassies all over the world trying to move to Germany and take advantage of the EU Blue Card ( read about what the Blue Card is here) they introduced in August of this year. Since August only 139 cards have been issued, the Department for Migration and Refugees reported. Of the 139 issued, 112 were from people already in Germany who moved here earlier than 2012, meaning only 27 were issued to people outside Germany.
For most foreigners Germany remains a country where they aren’t welcome, even despite them going the extra mile and changing the laws to allow in migrants. Germany isn’t as attractive to most migrants as the US or UK or even Canada due to the language and its history. A recent study on migration to Germany suggested that changing the laws wasn’t enough to lure in professional migrants but that instead the country should go out and advertise itself to the world.

Other suggestions that have been floated about have been to encourage the German officials to try and tailor their migration laws to those of Canada. In Canada 45% of the migrants have degrees while in Germany only 28%. Also children to migrants in Canada perform better in schools when compared to those in Germany. This would include making it easier for professional foreigners from third statesto get visas to Germany as well as loosen the rules for them to get jobs. Another would also be to allow foreigners with “bad” German to get away with it if they are fluent in English. Taking up these suggestions would make Germany more attractive to foreigners by sending out the signal that they are an open and flexible society.

From the look of things, Germany will take up any suggestions handed to them if it gives them hope to get more professional foreigners into the country. Currently the country is loosing over 5000 engineers a year; the FAZ suggest that the country currently lacks 120000 people in the MINT careers. If Germany wants to maintain it’s position as the world Technology leader, they better find a way to fill in these positions fast.