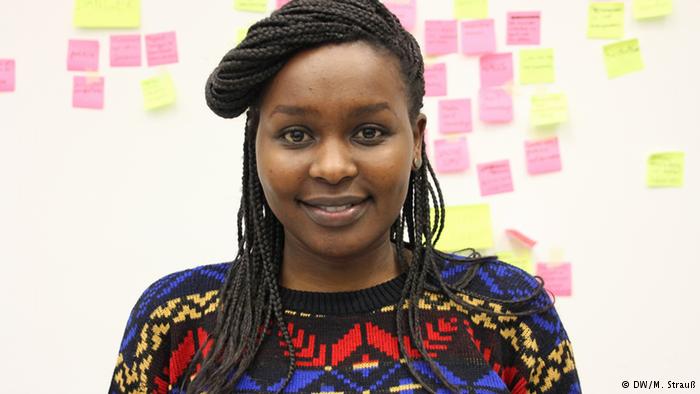 The red, blue and yellow patterns on her wooly jumper faintly resemble pine branches. “I bought it in Berlin,” says Brenda Otieno. She has been carried along by the festive feeling in Germany. When Otieno arrived in the European country last March she felt like she had been put inside a freezer, said the 26-year-old Kenyan.

“The first time I came out of the airport I had to put on all the coats I had carried in the luggage.” Otieno is one of the participants of Afrika Kommt! , an initiative launched by the German industry in 2008 to train future business leaders from sub-Saharan Africa.

“Afrika Kommt! has been a passion since the time I finished university,” Otieno told DW. After studying economics and finance in Kenya’s bustling capital, Nairobi, she worked for four years in marketing and advertising companies as well as in a bank.

Having been selected for the Africa Kommt! program, Otieno is currently working as an intern at the German software company SAP. While she spent the first six months of her program at SAP’s Innovation Center in Potsdam, she is now based at a branch office in Berlin.

Through the initiative, which is coordinated by the German Agency for International Cooperation (GIZ), German businesses not only seek to train young African managers. They also aim to establish better contacts with African countries to foster their business interests on the continent.

The program has become increasingly popular in Africa, with over 3,000 young managers from across the region competing for the 18 places available this time around.

After acquiring basic German skills back home, marketing expert Brenda Otieno and the other selected managers spent about about three months honing their language skills following their arrival in Germany.

During the last eight months, Otieno has passed through various departments at SAP – sales, communications, customer services – giving her an insight into how the company operates, she said.

But, she adds, it’s mutually beneficial as she is also imparting her European colleagues a new understanding of Africa.

“Almost 70 percent of the people I have met in Germany have not been to Africa. And many of them who have been there have only visited places like Morocco and Egypt.” Most of them didn’t know much about Kenya, she noted.

In a bid to raise awareness about her home country, Otieno once organized a Kenyan day at the SAP office in Berlin – filled with typical Kenyan food, music and other cultural activities. This has sparked interest among her colleagues about Kenya, Otieno said.

Inge Petri, who is in charge of the Afrika Kommt! program at SAP, says Otieno’s colleagues at SAP value her inputs.

“She is not someone who has been working for the company for years. She also has a different cultural background. So she brings with her totally different experiences and a different perspective,” Petri pointed out.

An ambassador back home

Besides weekend courses and excursions, the initiative also offers international management seminars. In addition to the companies where they work, the participants also have the opportunity to get to know other businesses and establish professional networks.

These networks, hope German businesses, would help not only the participants but also the German economy.

Africa’s economy has been growing rapidly in recent years, and many African nations have become important trade and investment partners for Germany. Nevertheless, there is still huge, untapped potential as the continent accounts for just 1.3 percent of Germany’s total foreign trade.

But a raft of problems such as a lack of infrastructure and good governance as well as political turmoil have negatively impacted many Africa countries’ growth prospects.

Upon their return to their home countries, the initiative’s former participants are expected to be ambassadors for change, in addition to being effective partners for German firms.

Otieno: ‘Afrika Kommt! has been a passion since the time I finished university’

SAP roped in one of the program’s former participants to work at the company’s subsidiary in South Africa. The young manager is now acting as an important link between the office there and the parent company in Germany, said Petri.

“The participants get to know the German working environment. Therefore when they return to their countries, they have a totally different understanding of international cooperation. And they have very good job opportunities,” she underlined.

Otieno says: “At SAP, I’m given space to be creative and innovative. Back home it’s just do your job, finish, go home.”

She, together with some other former participants of the program, is planning to set up a talent promotion center for young people in Nairobi, in an effort to empower Kenyan youth and foster their skills.

“Many young people just join university because their parents tell them it will secure their financial future. But personally, they don’t know which path they want to take,” she says. That’s why, Otieno notes, when she goes back to Africa she wants to be role model and a mentor for young Kenyans.

Auma Obama at the Thalia Lessingtage in Hamburg

Why Entrepreneurs Need to Pay Attention to Swahili

Kenyan from Berlin Admitted to the Young Global Leaders Community