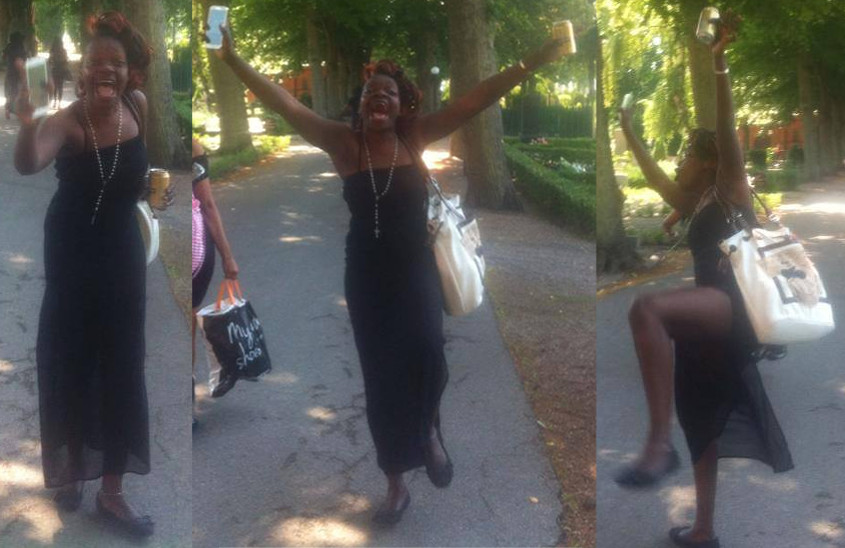 A Kenyan lady, Vinnie Atieno passed away in her sleep at her home in Sweden on 16th of June 2014. She leaves behind a husband and two children.

The results of the postmortem were not released or at least her husband never announced the results to the rest of the family nor to the Kenyan community in Sweden.

On 4th of July, the Kenyan community gathered for Vinnie’s send off but her sister, Diana who lives in Germany could hear none of it. During prior meetings, Diana and another Aunt to Vinnie from Sweden had announced that the money raised by the Kenyan community would go into bringing Vinnie’s mother and other relatives from Kenya to Sweden for the funeral.

On the day of the burial, no relative had been flown in from Kenya despite the money being pocketed. On the other hand, Vinnie’s sister, Diana changed her tune demanding that they put a stop to the funeral.

Unfortunately, Diana didn’t express these demands diplomatically choosing instead to scream and even jump in front of a car she believed was carrying her sister’s remains. The police were even called to try and control her erratic actions only for her to give the police a lecture on how German police are worse than the Swedish ones.

Luckily, the funeral director together with the family agreed to postpone the burial until Vinnie’s mother comes from Kenya. Vinnie’s family and I assume her sister, Diana, have been sharing their view and thoughts on the happenings on a Facebook page: Vinnie Atieno’s Death Announcement.

This comes after another family drama threatened to turn a burial held in Köln last month into a battle field. It is quite unfortunate that family drama takes away the energy from bidding goodbye to the person and comforting the family to anger and fights.

Having said that, I feel it is disheartening that they would dismiss Diana’s request for full information before burying her sister and instead drive her to becoming so dramatic. The whole incident was embarrassing (even to Diana herself but if that was the only way she could fight for her sister?) and could have been avoided.

If there is any doubt on the cause of murder, however small or unfounded such doubt may be, they should work towards clearing that up before attempting to bury the late. Not unless they have something to hide.

However it is also worth noting that sometimes we have relatives who are dramatic at funerals and yet they had no relationship with the person while they were alive.  (I’m not saying that was the case here just pointing it out.)

You can read the account from someone who was at the event here or see the pictures on Facebook here.