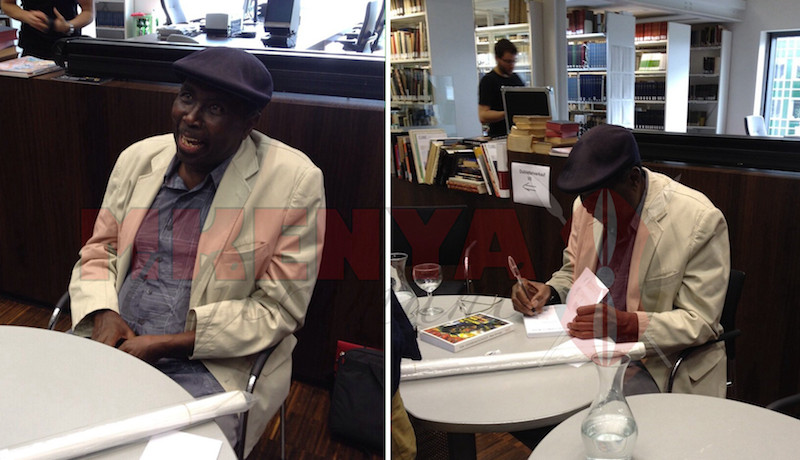 Last evening saw Meja Mwangi wrap up his book tour in Germany after a book reading event in Münster.

The renowned Kenyan author has been in Germany for the last couple of days to promote his latest book, Rafiki, the Guitar Man, which was recently translated into German. The author seems to have a huge following in Germany, with many of his fans attending the book reading to interact with him. Some at the events confessed to have read his books more than 30 years ago while they were still in school.

The events that were both hosted by Thomas Brückner in Cologne and Münster, were a great success. The host was very well conservant with Africa, African history and the current affairs in Africa, thus being able to explain and clarify to the audience some of the issues alluded to by the author and some of the attendees who asked questions. He even went ahead to crack a joke about Mrs Chantal Biya, the first lady of Cameroon and Mama Peace, the first lady of Nigeria. The joke was quite funny, but unfortunately most people didn’t get the joke because they had no background information 🙁

Meja Mwangi on the other hand was quite comical with some of his answers, a character that seems to be evident in most of his books.

He spoke of the changes in the reading culture in Kenya, mentioning that young people back in the day used to read more books and it was normal to see young people carrying novels around. Today unfortunately, most young people prefer to carry around a smartphone. Although he hopes that the young people are reading books on those smart devices, he remains sceptical about it.

He attributed the change of a reading culture to lack of a home library tradition in most of our homes. Most people in Kenya were brought up only buying books for school, and they only read the books in school. When most eventually complete their studies, few continue buying books for leisure with many waiting until they have children to buy school books for them.

On the other hand he applauded the numerous new age literature events held in Kenya encouraging the youth to read books. “Although, I haven’t attended any of them yet. I have been invited several times but they tend to clash with my travelling plans. They are a great way to encourage the younger generation to read books”, he told Mkenya Ujerumani during an interview after the event.

When asked by one of the attendees about the lingua franca in Kenya and East Africa as a whole and his use of English and Swahili in his books, he was able to explain that although Kiswahili was the lingua franca in East Africa, Kenya and Uganda had focused more on English while Tanzania under Nyerere had been able to reinforce Swahili and in turn strengthen it. He noted the characters in his books spoke both English and Swahili depending on the situation because that was how most people in East Africa and specifically in Kenya communicated. He added also that it was perfectly normal in Kenya to encounter people who spoke “ashamadely little Swahili” despite growing up in Kenya.

When asked if he would write a book in Kiswahili or even translate one of his books in Swahili considering that most publishers in Kenya were now publishing more Swahili literature, he pointed out that his Swahili wasn’t good enough to write a book in Swahili but was open to having his work translated if offered.

Before parting ways we asked him about his motivation to start writing, considering in his generation the only writers we had were all University professors.

“I was inspired by Ngugi”, he replied.

“But weren’t you intimidated by the fact that all other writers at the time were Professors or atleast worked in the University while you didn’t?”, I insisted

“No, it didn’t matter to me. I hadn’t even realised it, I just wanted to write and that’s what I did”, he replied with a proud grin on his face.

Deutsche Welle was also at the event in Cologne and they also spoke to Meja, read their interview here.