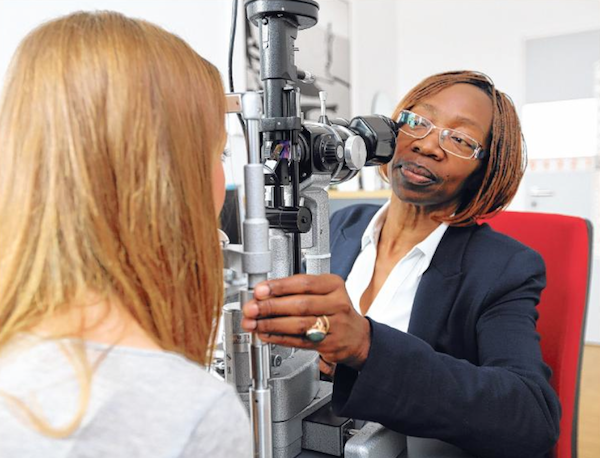 Dr. Mary Asiyo-Vogel came to Germany in 1992, after practising medicine in Kenya. In most cases you’d expect a foreigner to drop any hopes of practicing medicine in Germany and instead look for a profession “more suited to a foreigner”, well not this power lady. Her love for medicine has seen her become one of the head ophthalmologist in a leading eye clinic in Lübeck.

Dr. Mary comes from a tiny village close to Lake Victoria, what she calls, “the back of beyond”. She first left Kenya in 1975 to go to Russia to study, she completed her studies and eventually graduated in Ukraine before returning to Kenya. She specialised in ophthalmology at the University of Nairobi and did her residency at Kenyatta National Hospital where she later went ahead to practice as a doctor.

In 1988, she got a DAAD scholarship that brought her to Ludwig-Maximilians-University in Munich where she stayed for a year. She returned to Kenya and moved to the General Provincial Hospital in Garissa.

During a research project in 1992, she met the love of her life and decided to move with him to Germany.  She packed her bags yet again and returned to Germany, this time for good. She had to repeat 5 years of her studies in medicine, “Coming from a developping country, you have to show what your capabilities are”, Dr. Mary added. Mary went back to school and got a German doctorate that she completed, as a “summa cum lade”. Until 1st March 2012, the German law didn’t allow foreigners to set up private clinics (niederlassen), even Dr. Mary. “As a foreigner that would have been impossible”, the now niedergelassene doctor commented.

“Discrimination is normal here, I’ve encountered it both as a wife to a German and as a foreign doctor working in Germany. But the advantages of living in Germany: great medical options and an intact health system, override the disadvantages”, Dr. Mary said.

Dr. Mary isn’t stuck in Germany enjoying the advantages on her own. She is the founder of the Innovation Eye Centre in Kisii which is dedicated to offer affordable eye care to people in rural Kenya. Being an experienced Ophthalmologist, she uses her knowledge and experience to treat people in Kisii as well as coordinating some of her colleagues here in Germany to work at the Center. “The best is to build bridges between societies”.