GIZ workers around the world have signed a petition demanding for an increase in their salaries since they were forced to start paying taxes.

Till the new law came into effect, all GIZ workers sent abroad as specialist in developmental aid (Fachkraft für Entwicklungshilfe) didn’t pay taxes in their host countries nor in Germany. Some of the affected employees complained that being forced to pay taxes would endanger their standard of living in their host country. They remarked that the taxed salaries were too low to sustain them.

Apparently, not paying taxes was the only advantage they got while sacrificing their lives living in risky parts of the world enduring hardships. (like Runda, Muthaiga, Karen and Nyali)

Considering the numerous allowances and the fact that the euro is stronger than most of the other currencies used in the countries where gig goes to “develop”, kwani where are they taking their money? Mind you, they aren’t paying all the German taxes, they only pay Lohnsteuer which is maximum at 9% depending on which State. Seems they’ve lived in corrupt countries till they’ve started reasoning like the leaders down there.

(If we all had a choice or option not to pay taxes based on our level of hardship in the host country, who would pay taxes in Germany na hii baridi yote??? Did you know working in Germany you pay close to 45% of all your earnings as taxes.)

Interested in finding out how much their allowances are? Check below.

According to the FAZ the salaries, range from 100,000 per annum for Entwicklungsfachkräfte while Entwicklungshelfer and employees of the Federal governmant earn about €70.000. Some GIZ employees earn more than €160.000. A German Ambassador earns about two thirds the amount a GIZ Manager earns. 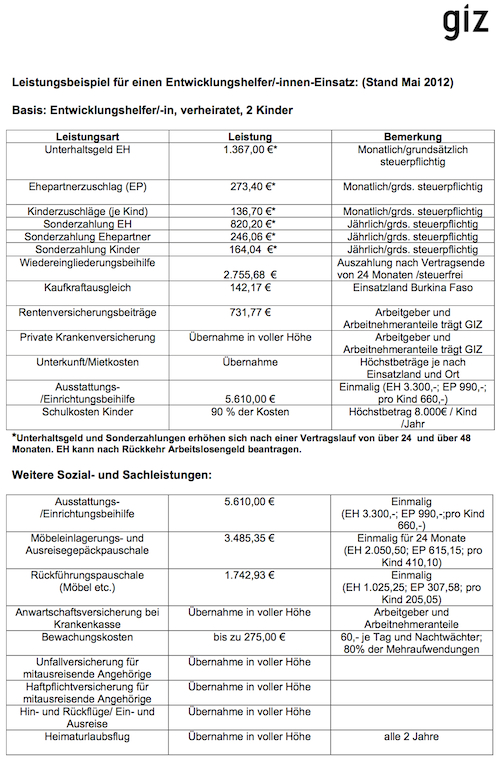 6 Contractual Myths to Consider When Signing Contracts in Germany