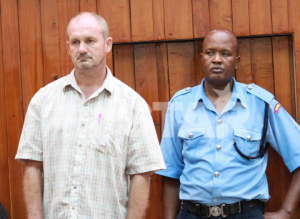 Michael Ribcke, a 43 year old German man was on Friday acquitted of murder charges in Mombasa by Judge Maureen Odero for lack of enough evidence against the man.

Michael who is originally from Hamburg was suspected of killing his Kenyan newly wedded wife, Esther Igoki, in 2009. That fateful morning, the man was found sleeping next to the decomposing corpse of his wife. The police and the neighbours were made aware of the corpse by the stench that emanated from the house. When the police entered the house, the man was arrested and charged with murder.

The man was found with a scar on his chest, which was found out to have been caused by his attempted suicide. Apparently Michael is psychological unstable but that wasn’t enough to implicate him.

“In the P3 form filled at the police station, it is noted that he looked sick and depressed. The psychiatrist testified that he was mentally disoriented and suffered mental sickness,” Odero said.

“Indeed for a man to remain holed up in a house with a badly decomposing stinking dead body is clear evidence of an unsound mind.”

An autopsy on his wife found that she died died from asphyxia (deficient supply of oxygen/suffocation) due to the presence of mucus on the vocal cords. There were no scars or signs on her neck to signal being strangled. “Choking can cause asphyxia. Even inhalation of food but not food stuck in the throat. The choking can be common with people who take alcohol but not necessarily a lot of alcohol,” said the pathologist.

During the trial Ribcke told the court that he slipped into a state of unconsciousness after a drinking spree with his wife and brother-in-law, and then woke up in hospital.

However, this argument was dismissed in court.

“I find the accused defence as utter lies and an afterthought. I am not persuaded that there is any truth to this defence. I reject this in its entirety but the onus to prove lies in the prosecution,” Odero said

After the court process, he was officially handed over to the German embassy official. Michael told the Star reporters that he would be taking the first flight out of Kenya after his release.