If you’ve been hiding and haven’t heard about this, let me inform you.

Recently two CDU politicians, one of them the mayor, and the Deutsche Bahn in Schwäbisch Gmünd thought up an idea to help the refugees in the refugee camp in Tübingen.

Currently the train station is being renovated thus the elevators and lifts aren’t working. Considering this is summer time with many people either coming or going on holiday, most of the people at the train station have suitcases with them.

The politicians and DB decided to help the refugees make some extra cash and also integrate with the society by giving a job to help the passengers carry their suit cases up and down the stair cases in the train station. The refugees are to be paid €1,03 per hour. The current limit for a refugee is €1,05 per hour.

The mayor, Richard Arnold, flagged off the project and encouraged those that would use the service to give the refugees huge tips for their amazing job. The refugees were given red t-shirts with the city logo and a huge label written Service. Because of the heat around this time, the refugees were also given straw hats to wear. During the launch of the event, the mayor took a picture with the porters, little did he know that was the beginning of his problems.

The picture went viral with many groups terming the whole venture racist, Nazi, neocolonialism and slavery. People are fuming, with the story hitting the news in many other countries in Europe.

The mayor argued that it was unfair and unhealthy to condemn refugees to staying home without offering them a job. He defended himself saying, he wanted to help, the refugees staying home was making them depressed. The refugees who had offered to work at the train station were disappointed when they had to stop their new jobs after people complained about the whole issue. They hope they would be allowed to go back and work.

Some other groups have written to DB and suggested that the refugees get back the jobs and earn minimum wage and the extra cash (above €1,05) be given to organisations that help refugees in Germany. 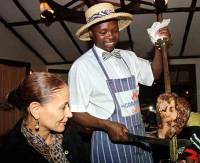 This thing is just plain controversial. Sometimes I tend to think Germans are damned regardless of how they interact with Africans. Damned if they do, damned if they don’t. People earning €1.05 can be termed slavery but them earning more money and it being given away sounds worse. And for the picture of the mayor with the porters, why are people complaining? The workers at the carnivore in Nairobi dress like that with no issues.

What do you guys think about this whole issue? Is this slavery? Was this being helpful or was it a racist gesture from those who initiated it? How do you think they should have helped the refugees instead?