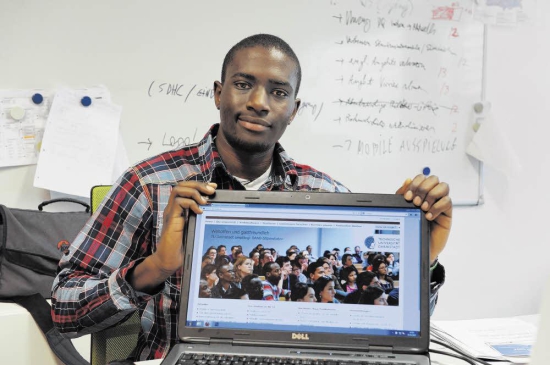 I’ve spoken about Earning a living during your studies in Germany when you have no scholarship or relatives. Well I stumbled upon this article from the Frankfurter Rundschau of a Kenyan student in TU Darmstadt talking about working at the Uni as a Hilfswissenschaftlicher Mitarbeiter (HiWi).

Sidney Odhiambo the 22 year old Kenyan who’s studying Electrical Engineering in his 4th Semester, not only juggles between his studies and his job at the Uni but also runs the Organisation for Kenyan students in Hessen (Organisation kenianischer Studierender Hessen e.V OKSH) and when he has extra time, squeezes in basketball to the already full itinerary.

The Kenyan who speaks fluent German, came to Germany with no knowledge in German but got a chance to learn during his FSJ in Osnabrück. In 2010 he attended Studienkolleg in order to qualify for the course at TU Darmstadt and since 2011, he’s studying at the TU aiming to specialise in Microtechnology and Precision Engineering (Mikro- und Feinwerktechnik).

He works 20hrs a week as part of the Uni web team where he writes and maintains the website, posts new information for the students both online and on the Uni boards. The job also helps him get information that he shares with members of the OKSH e.V. As a HiWi he earns approximately €700 a month that he uses to pay his bills.

“I’d like to encourage other foreign students to apply for such positions”, he said during the interview.

Through his job, he not only gets to pay his bills but also gets to understand the University better, gets informed, meets new people and also understands the German systems and society better.