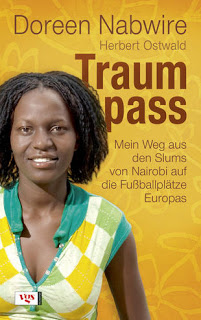 Doreen Nabwire Omondi is a sensational football player and a force to recon with on the pitch. She will be coming back to Germany from mid April for 3months. She’ll be hosted by DJK DV Köln where she will help them and the Olympic Committee organize and prepare youths for the tournaments. This will be a social project, something that she’s very active in.Doreen is the current Captain of Kenya’s Women’s National Football Team. She has basically seen it all, having started playing football while living in the Mathare slums in Kenya. She has grown personally and professionally. She has played in clubs in Kenya, Germany and the Netherlands: namely Mathare United Women FC, Werder Bremen and FC Zwolle.

She was named the FIFA Ambassador “Football for Hope”; won the Streetfootball festival in 2006 and is the author of the book, “Traumpass”. She also runs an organisation named “Girls Unlimited”.