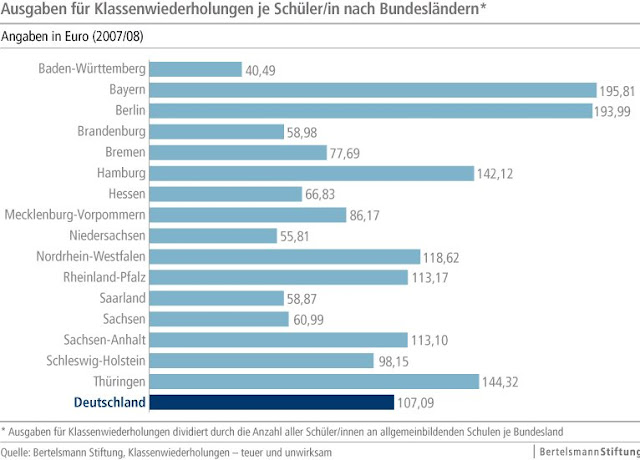 The new red-green coalition in Niedersachsen wants to do away with repetition of classes for students.

According to current statistics more than 170,000 pupils repeat classes annually in Germany, though when compared to the total number of pupils in the country, 11.4million in 2011/2012, this is only 1,1%, this remains a huge problem for the German education system.
States like Hamburg do not allow repeating from class 1 to 9 since 2010 and as from 2017, repeating will be illegal for all classes. The SPD in Hamburg has instead set the rule that if a student gets a 5 in one of the core subjects they have to attend a free after school tutorial to ensure they improve instead of repeating a whole year.

Rheinland-Pfalz will be introducing a new project this year where instead of kids repeating they are discouraged instead from choosing a certain school instead. Berlin doesn’t allow repetition in their Secondary schools (formerly Haupt und Realschule) not unless the parents insist. In primary schools only children between class 3 and 6 are allowed to repeat while in Gymnasium the Class-Conference decides. BW already did away with repeating in the Gemeinschaftsschule, though they are working to introduce the same in other schools according to the SPD. “The fear of repeating classes isn’t not a sensible motivation to learn,” Andreas Stoch (SPD).

Bayern allows pupils with at least three 5s in core subjects to sit a Nachprüfung and usually students who had to take a Nachprüfung were usually overburdened.

For those who encourage repeating, their arguement is such a law will instead continue to encourage laziness in children because instead of them improving their performance, everyone is blaming the system. It’s not a coincidence that States that demand for better grades like Bayern, BW, Sachsen and Thüringen usually have students performing better.

According to an Education expert, Hosenfeld who was interviewed by the Spiegel, it has been an illusion that slow students get better after repeating classes and that they slow down other students if they continue to proceed. According to him, it’s the teacher’s responsibility to ensure that slow and fast students learn together and create homogenity in the classroom. Also the idea that repeating improves a child’s performance is a fallacy. In very few cases do you see a student perform better just by repeating while in the usual case, a child looses interest in learning and eventually performs even worse than they did before repeating.

Hosenfeld encourages heterogenous study groups, children giving feedback to the teachers as well as extra effort by teachers to help migrant children. Some of these have been used in NRW, to reduce the number of students repeating classes and has worked pretty well.