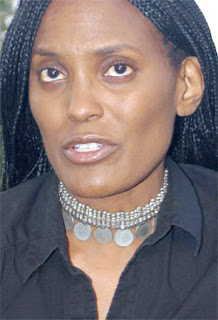 This year at Talk in Trafo, an annual event organized by Binder Rechtsanwälte to bring together the best lawyers from all over the world, Soiya Gecaga was the Keynote Speaker. An honour not offered to many, last year’s keynote speaker was Joachim Gauck.

It’s amazing that you read about some Kenyans from newspapers here and yet you’ve never heard about them before; despite the fact they are doing amazing things back home.

I’d like to introduce to you Soiya Gecaga, a daughter to a diplomat and the granddaughter to our country’s founding father, Jomo Kenyatta.  During the post election violence that erupted in the country in 2008, she quit her job as a top notch lawyer in London to go back home. Her fist plan was to go back and take part in peace and reconciliation initiatives, but as they say life always comes in between.

She had moved to the UK when she was only 11 and had lived there for 26yrs attending some of  the best schools in the UK including St Andrews (where Prince William and Kate met). Though she regularly went to Kenya for her holidays, she didn’t know the country that well. On her return she decided to start visiting prisons, slums and the camps for the IDPs.
Soiya is the founder of the foundation We Change, a foundation that aims to offer world class quality education to slum dwellers at the lowest cost (Sh.150). Together with a local daycare that was in Mathare Early Childhood Development (ECD) Centre, they have worked towards creating hope and conducive environment for poor children.The centre incorporates six core elements; education, food and nutrition, health care, play, life skills and child protection.

She takes inspiration from her grandmother whom she’s named after, Thoiya Gecaga.And she speaks highly of her: “My great grandfather educated his five sons, but left my grandmother out just because she was a girl. She educated herself and among her achievements was making history as the first Kenyan nominated MP in the Legislative Assembly in 1958.”

Soiya believes that she, too, like her namesake, must leave a legacy.

Made in…Africa? It Could Happen….