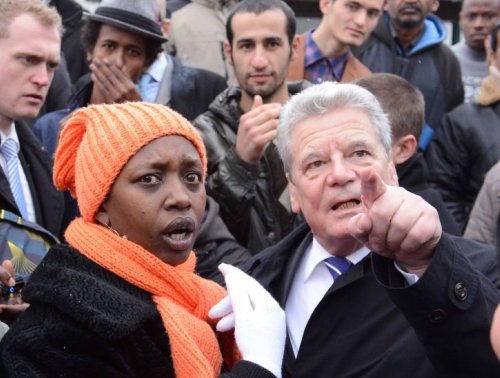 President Gauck who in December visited the Asylum heim in Berlin and even got to meet most of the refugees and talk to them, including a Kenyan named Jane who featured prominently in the pictures; has come out declaring that the Refugees though marginalized and tend to be mistreated in Germany offer hope to Germany’s future.

The report from The Local had this to say:

He spoke as the Interior Ministry released figures showing that the number of applications for asylum had risen by 41 percent during 2012, with more people fleeing Syria and the Balkans than previously.
“We need open doors for the persecuted, and not only due to our constitution and our history but also for economic reasons,” said Gauck on Tuesday.

“Immigrants can help us to keep the living standards from today into the next generation – they should be greeted by the people with open hearts or at least be accepted gladly.” It was time for a new welcoming culture, he said.

The Federal Office for Migration and Refugees said that last year 6,201 people from Syria applied for asylum in Germany – an increase of 135 percent on the previous year. Syrians fleeing the civil war at home formed the third largest group applying for asylum in Germany after Serbians and Afghans.

More than two thirds of those who escaped Syria were granted protection from extradition.

Last year just over 64,500 people applied for asylum in Germany, just over 14 percent of whom were granted refugee status. A further 13.5 percent were given protection from extradition, while 49.7 percent saw their application rejected.

Interior Minister Hans-Peter Friedrich said the increase in Syrian refugees was to be expected considering the civil war in the country. But what he called an enormous rise in applications from the western Balkan states had not been foreseeable as he said there was not generally political persecution there.

The second half of the year saw a particularly strong rise in asylum applications by people from Serbia, Macedonia and Bosnia-Herzegovina, yet none could prove asylum-relevant persecution, the Interior Ministry said. The most applications last year came from Serbia, with 8,477 people saying they had no option but to leave.

Human rights organisation Pro Asyl said every case should be examined carefully, and said the rapid assessments which were used to decide on people from Serbia and Macedonia, were, “the opposite of an unbiased examination.”

The argument that the fact that none had been granted asylum proved there were no grounds for their applications was a dangerous, circular conclusion, the group said.

African Refugees Paid €500 by Italy to Come to Germany