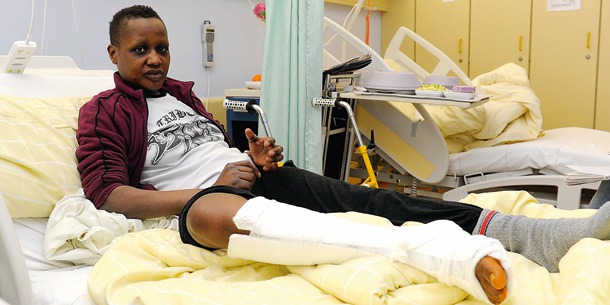 The 51 year old man who had been charged with attempted murder for pushing the Kenyan lady, Nelly, onto the U-Bahn tracks in Vienna has been set free. (Read the story, Kenyan Woman pushed on Subway tracks for loud cell conversation and Nelly’s Interview, An Interview with Nelly, pushed on UBahn Tracks)

The office of public prosecutions claimed that the charge of attempted murder was too harsh thus changing it to a simple charge of assault. This has been met with disappointment from many foreigners who had been impressed by the harsher charge.

The public prosector said that according to the man’s statement, the whole incident didn’t “sound” like an attempted murder and also the man had been married to several foreigners meaning he wasn’t racist and at the time of the incident he was also with his wife who is also a foreigner. Another argument was also that the man running away was also not a sign of guilt but a panic reaction. It was also said that the man couldn’t have known that Nelly would break a leg from the fall onto the tracks.

(As in, I have to comment. So this guy was pushing Nelly thinking she’s a wall and wouldn’t fall ama he thought she was a bird and would fly instead? Since when does marrying a foreigner exempt you from being a racist? I’ve never understood this kind of argument. As in all these excuses they are making for this guy, they are just crazy. Why did he make racist remarks? Ama were those supposed to be “jokes”? Mscheeewww.)

The whole incident has brought out very different reactions from different groups and individuals in Austria. The Teilnehmende Medienbeobachtung has been out calling for the austrian papers to stop writing headlines and commentaries referring to Nelly as black African (Schwarzafrikanerin) (read their article Schwarzafrika gibt es nicht). But not all comments were positive, with others bashing Nelly claiming she couldn’t speak any German despite being in Austria for long (mind you these comments came from someone who read the article and had never heard Nelly speak). Another said that it was good a foreigner had been attacked as now they (foreigners) will know what Austrian women have been feeling being attacked by foreigners.

Mentorship for Qualified Migrants in Austria