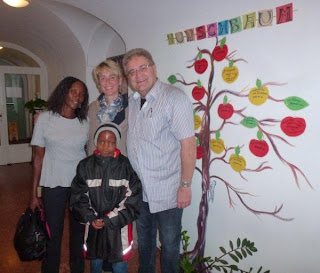 Nuru, a 12 year old maasai was born without earlobes and with sealed ear canals; a condition known as auricular dysplasia (Ohrmuscheldysplasie in German). He’s never been able to hear since he was born and now he has been brought to Salzburg for a surgery that has never been done on anyone else before him. The doctors in Salzburg have been preparing for this since December 2011.
Nuru was discovered in El Doro by Kurt Wimmer while he was on holiday. When he returned to Germany he started the NURU Hilfsprojekt to try and find a way to help Nuru. He met up with Dr Rasp a specialist in Throat Nose Ear diseases at the Salzbürger Universitätsklinik; who was very fascinated by the prospects of helpin out Nuru that he got in touch with and later partnered with Medel a company known for developping and producing Bonebridge implants. The only think Wimmer had to do was bring Nuru to Austria for 3months for the doctors to diagnose and decide on how to go about treatment. 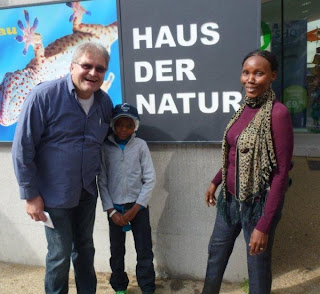 Had Nuru been Austrian, the healthsystem would have paid for all those expenses but being Kenyan the family had to pay. Kurt Wimmer and the film maker Roland Wieland agreed to pay for it. Nuru landed in Salzburg with his mum on the 15th Sept ready for the surgery and a new life ahead.

If you’re in Salzburg you can pass by the hospital/hotel and say hi or even treat them for lunch/dinner or a visit to the museum and be part of Nuru’s adventures.


You can read about Nuru’s adventures in Austria on his Facebook page here.

If you would like to help get Nuru to hear; you can contribute to: