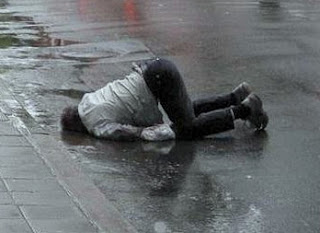 A driving school teacher called the police at 11:11am to report one of his students. The 26 year old Kenyan living in Bielefeld had decided to show up at the driving school drunk for his driving lesson. He argued that he wasn’t ready to miss his driving lesson and he could very well drive in his current state. The scared teacher locked the guy out of the car and refused to let him drive but the guy entered the car and fell asleep on the back seat of the car where he was later found by the police.

On further investigation by the police it was discovered, he had 2.34 pro mille in his blood. For those that don’t know at 0.5 pro mille you risk loosing your licence for unto 3months plus a fine and from 1.1 pro mille then it’s considered a criminal offence and can will land you in jail for 6-12months; a higher fine; loosing your licence for at least 6months and 18 points at Flensburg.

Now at 2.34 wonder if he’ll ever be allowed to drive or even get a licence in Germany ever.
Share with friends: