This article was published in the Standard on Thursday 19th July 2012, written by Luke Anami about his first visit to Cologne. Thought I’d share with you guys, especially those that have been to Cologne so often or live there that they don’t even remember how it felt to see the Dom for the first time. Enjoy!

The German city is famous for its many tourist attractions from the Cologne Cathedral, museums to love padlocks across River Rhine, writes LUKE ANAMI

When I got the chance to visit Cologne, Germany, as part of my study tour of European Union (EU), I did not know what to expect.

Germany evokes memories of the 1st and 2nd world wars, Football Made in Germany, industrialisation and the big brother in the EU.

However, no amount of reading can adequately prepare one for the real life experience of the place, referred to as Köln in German.

Cologne is Germany’s fourth largest city after Berlin, Hamburg and Munich and the largest city in the State of North Rhine-Westphalia. One of the oldest cities in Germany, having been founded by the Romans in the year 38 BC, Cologne lies on the River Rhine and is regularly affected by flooding from the Rhine and thus considered the most flood-prone European city.

Cologne Cathedral (German: Kölner Dom) is the city’s most famous monument and the Cologne residents’ most respected landmark. The city also has the most pubs per capita in Germany. The city has “countless” bars, restaurants and pubs. 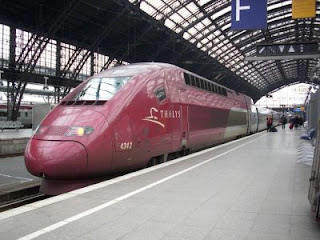 The journey begun early on a Monday morning from Brussels. Opting to travel by electric train for the first time in my life, it meant we book a train ticket in Brussels-Zuid or Midi railway station.

Travelling on a Thalys Electric Train, from Brussels to Cologne, a distance of about 200 kilometres, approximately distance between Nairobi and Mau Summit (216Kms) (Nairobi-Mau Summit –Kericho junction on Great North Road) was covered within 1 hour and 45 minutes.

While travelling by road between Nairobi and Mau Summit would take approximately 3 hours, 45 minutes, it takes half the same time with an electric train.

On the way we passed through Aachen. The only way you realise you are in Germany is the change in language and number plates.

With more than 20 European countries using the Schengen visa, one is able to cross from one European country to another without going through customs and immigration procedures.

Having been a beneficiary of the EU integration process, I longed for a time when it will be possible to travel in East Africa and indeed the rest of the continent without having to be subjected to custom and immigration checks at every border point.

Part of my mission was to visit my East African Community Integration Lecturer (Journalism) Jutta Vom Hoffe who resides in Cologne besides meeting Kenyans as well.

She did not disappoint, as I was able to find her waiting for us at the foot of the famous Cologne Cathedral.

“Welcome to my home town and country,” Jutta said. “What would you like, a visit around the city or to my place?” With my colleague Paul, we opted to visit her place where we were welcomed to Kenyan tea though not labelled so! But before that we had a brief tour of the cathedral.

Cologne Cathedral is the city’s most famous monument and the Cologne residents’ most respected landmark. It is a Gothic church, started in 1248, and completed in 1880. In 1996, it was designated a World Heritage site; it houses the Shrine of the Three Kings that supposedly contains the relics of the Three Magi.

“It is believed the remains of the three kings were brought and buried here making this place a major pilgrimage destination especially for the Catholics,” Jutta explained.

Cologne’s Archbishop Rainald of Dassel is said to have given the relics of the Three Wise Men to Cologne’s cathedral in 1164, after they in fact had been captured from Milan. Besides the three magi, Cologne preserves the relics of Saint Ursula and Albertus Magnus.

The cathedral, started in 1248 but was abandoned around 1560, and eventually finished in 1880 not just as a place of worship but also as a German national monument celebrating the newly founded German empire and the continuity of the German nation since the Middle Ages.

Residents of Cologne sometimes refer to the cathedral as “the eternal construction site” or Dauerbaustelle in German.

There are many Kenyans living and working in Cologne.

“We are a number of us here. I first came here in 1987 but due to some issues I left for Nairobi again,” Janet Mor Odhiambo, a Kenyan Germany-based musician said. “However, I have now lived here since then. I should take you to taste the German food before you visit the bridge.” Janet speaks fluent German and French and is famous for her hit song Kenya that plays on Kenyan airwaves.

Janet who goes by her stage name Geena Moore took over the roles of a tourist guide in Cologne with the first stop to test the famous Kölsch beer. Cologne is well known for this beer. Kölsch is also the name of the local dialect. This has led to the common joke of Kölsch being the only language one can drink!

The Rhine River that I had read in my geography books was top on mind. To cross River Rhine commuters have a luxury of seven bridges. But the Hohenzollernbrücke, which connects the Western side of Cologne with the Eastern city centre, sticks out. This colossal structure originally served as both a railway and vehicle bridge but after it’s destruction in 1945, and subsequent rebuild a few years later, it now stands as a rail and pedestrian crossing across the river. 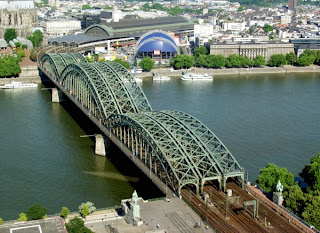 The Hohenzollernbrücke Bridge carries approximately 1,200 trains per day and is the main access point between Cologne and much of Europe. 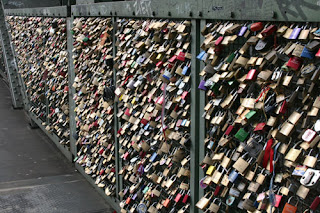 But what was more puzzling was the sheer number of padlocks along the foot pedestrian crossing across the river.

“What are these padlocks for?” I inquired.

“They are known as love padlocks, (also ‘Love Locks’). It is a custom by which padlocks are affixed to a fence, gate, bridge or similar public fixture by sweethearts to symbolize their everlasting love,” Janet explained.

For many years, it has been tradition for couples to walk out onto the bridge with a padlock decorated with their initials. They use the bridge as an enormous canvas by locking their ‘Love Padlock’ — a symbol of their undying love — to the railings of the bridge before sealing it with a kiss and throwing their keys into the river Rhine below.

Cologne doesn’t limit itself to padlocks. The Hohenzollernbrücke Bridge excels itself, not only in terms of the length of its name, but also in terms of declaring undying love!

From what I learned, the locks are for lovers. They scratch their names into the locks; some have them engraved and then add the lock to the bridge. Stencilled onto the tarmac walkway lies the following message: “Love is only a four-letter word.”

Now an international tradition, “love padlocks” began humbly in the 1980s in the Hungarian town of PÃcs. The custom involves two lovers, a padlock and a fence or significant landmark of some kind. The subsequent bond of lock to fence symbolizes of course, eternal commitment. From Europe to North America, Asia to Oceania, dozens of love padlock sites now dot the globe.

“As far as traditions go, this one is particularly new as people only started devoting a padlock to the bridge as recent as 2008,” Janet explained. “In true Romeo and Juliet style, couples from the city and visiting cities wouldn’t let anything stand in the way of their love and rebelled against authorities who wanted the padlocks on the bridge removed.” Deutsche Bahn, the bridges operator, threatened to have the locks removed from the Bridge but in the end relented in the face of public opposition.

The bridge now remains a canvas for locals and visitors to declare their love for their partners. It is shocking how fast this tradition has swept the world. Perhaps it’s because we’re so romance prone, even the most cynical of us. 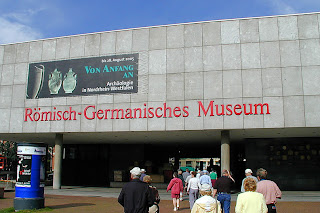 Cologne has several museums too. The famous Roman-Germanic Museum features art and architecture from the city’s distant past; the Museum Ludwig houses one of the most important collections of modern art in Europe, including a Picasso collection matched only by the museums in Barcelona and Paris.

Though tired, we wished we could sample all that Cologne could offer, including its lovely chocolates, but time and events beckoned.

Elimu ya Kenya and Education4Kenya meet in Altenburg

Registering a Company in Kenya

View of Teachers Around the World