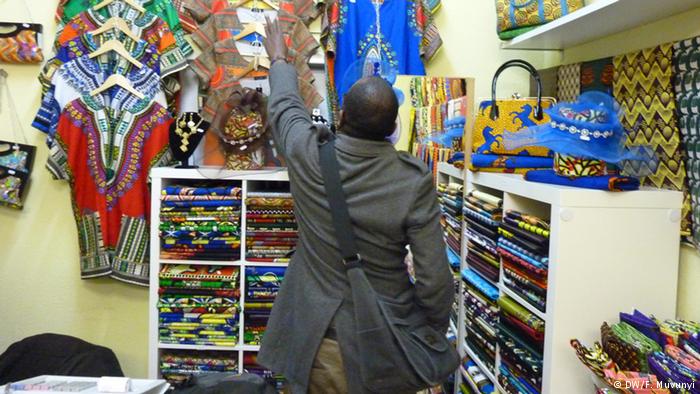 Setting up a small business in Germany can take longer than in Africa. There is no informal sector and entrepreneurs face tight regulations. Plenty of patience and a willingness to learn German are highly recommended.

Judging by the sound the customers are making and the smell of beer mixed with that of hair products and food spices, this could easily be a shop in the middle of Cameroon’s capital Yaounde or Lagos in Nigeria.

But it’s in the center of Cologne, western Germany, where a Cameroonian has set up his own business.

Pungong Hansel left his native country Cameroon for Germany ten years ago. A business-minded person, he was determined to become an entrepreneur in Germany, but he had to wait for seven years before he could make a start.

“When I came to Germany, it took me some time to get a residence permit and I had also to apply for a work permit. It all took time.” Hansel told DW while seated on a high bar stool in his shop.

The shop is stocked with beauty products such as hair pieces, creams, lotions and handbags. Food and beverages as well as African spices are also available.

Before Hansel established his business, the young man in his late 30s had to learn the German language. It took him seven years to become fully integrated into German society.

He then drew up a self-funded business plan which he submitted to the local authorities for approval.

According to the World Bank’s Doing Business report, registering a business in Germany should take less than a week. However, business experts like Martin Wilde, the managing director of the Association of Catholic Entrepreneurs in Germany, say the process takes much longer especially for African businesses.

“First, you have to understand the German market, which is difficult if you’re not in Germany, and you have to provide a lot of information about your finances.” Wilde told DW.

“The German local authorities will assess if the business represents an added value for the German economy or not.”

Wilde, who has worked for Germany’s Konrad Adenauer Foundation in Ghana, Nigeria and Senegal, said prospective African entrepreneurs in Germany should appreciate that they may well be denied a visa or a residence permit.

Pungong Hansel is one of the few lucky Africans whose business plan met the German standards after two weeks of scrutiny.

Securing permission to open a business in Germany is only half the battle. Many Africans have seen their businesses closed because of tight controls on hygiene and the strict taxation laws which are rigorously enforced.

“If you have maybe a business that has something to do with food, that is very sensitive and if they come and inspect the premises and ask you for any certificate that you’re supposed to have and you don’t have it, then you have no chance of continuing with your business.” Onserio Evans, a Kenyan national who runs a bar in Cologne, told DW.

Germany is known as a highly developed and high-cost economy. Business experts say the country offers an exciting national and international market because of a longstanding commitment to European integration.

However, this is unlikely to benefit small African entrepreneurs who prefer informal businesses.

“One important point to understand is that unlike in African countries, there’s no such thing like an informal sector in Germany at all. Either your business is registered or what you’re doing is illegal.” Wilde said.

In Germany, there is no alternative to the cumbersome process of business registration.

Getting the Most out of Marketing Your Business

Investment Opportunities in Kenya Other than Real Estate and Doing Business

In Which States Do You Earn The Highest Income in Germany?