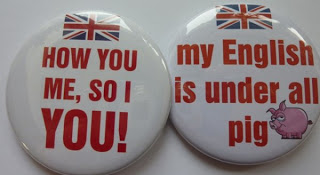 For those who studied Germanistik (German studies) or Anglistik (English studies), you call them false friends, but the rest of us simply referring to them as funny denglish mix ups.

If you keep changing from English to German, you get to a point you start becoming things. Although become and bekommen sound the same, in German it means to receive while in English it’s to begin to be (werden). In English you can become a teacher, a driver, ugly, friendly etc you DO NOT become a book, a car or a salary.

Sound same mean completely different things. In German, Eventuell means it might happen, in English, it WILL happen, it HAS TO happen even if at the very very end. So if you invite someone to a party and they use the eventuell make sure you know if it’s the English one or the German one or you might end up waiting for a very long time.

In English when you blame someone, you put the fault on the other person. In German, blamieren, is instead to make a fool of ones self. Ich habe mich blamiert, I blame myself not really, I made a fool of myself. So if you’re wondering why people who speak German are always blaming themselves, they don’t think it was their fault.

We all have CHEFs

So you met people and you’re wondering, does everyone in Germany have a chef? Hehehehe, not really. The chef in German translates to the boss, not to the English “cook”.

Engage and engagieren, might sound same or even similar but they talk about two completely different concepts. The English one is ready to plan for a wedding while the German one is diligent about their activities (that more often than not have nothing to do with any wedding).

This I think affects the English speakers more than the Germans, especially us Africans who buy African fabric. I bet most Germans wonder why Africans like buying factories, now you know. Fabrik in German is a factory while in English, Fabric is cloth.

If you learnt driving here or have had to have someone who speaks German give you instructions while driving, don’t wonder why they keep asking you to blink. Blinken in German is to indicate before making a turn, in English blink is to close and open your eyes quickly.

Written differently, sound completely the same but mean something different. So why are people photographs in Germany? Is that even possible? In Germany the Fotograph makes the photograph.

Wir sehen uns (später) but we’ll see each other later. In English you need more words to say the same thing, directly translating the few German words just makes it funny. The exclamated “wir sehen uns” after a meeting can usually be replaced by the English, “see you later“.

We STAND UP in the morning

Wann bist du aufgestanden (aufstehen)? When did you stand up? Well.

Seit wann bist du hier? Since when are you here? If you live in Germany long enough, the use of since increases. Unfortunately, you live here long enough it becomes acceptable English. In proper English you’d ask, When did you get here? I know this can be translated to Wann bist du gekommen? (Albeit I think this is Englished German, please correct me….)

The other is when you say “Ich bin seit 10 Jahre Artz”, in English it’s not (I’m since 10 years a doctor). You’d say in English, I’ve been a doctor for the last 10 years. Yes you require more words, but that’s English for you.

For this we’ll excuse Germans as they are world renowned for their quality machinery. They do make them quite well, unfortunately they take the making into making parties (party machen), making homework (Hausaufgabe machen) etc You get the drift. In English the German “machen” is usually replaced by “do” or “have”: you have a party and do your homework.

Ich ekläre dir. Doesn’t translate to I explain you. I’ll explain it to you (later). The later is optional in German but sounds funny when left out in English.

The funny sentence construction in German, takes a while to learn but immediately you do, you transfer it into English. You understand me not? I explain you. (Verstehst du mich nicht? Ich erkläre dir). We eat not, we understand not, we live not. This form of English can only be found in pre-Shakespearean literature. The rest of us mortals don’t speak like that, not unless you’re trying to be funny or reciting a poem.

How NOT to Impress a Lady