Numerus Clausus, has been a major issue of discussion in the University scene in Germany recently, should study courses be open to all and sundry or have limits?

Numerus Clausus (NC), is a system which limits the number of students allowed in a specific study course. This is usually done in study courses that have more applicants than spaces at the Uni but also to protect some professions from being flooded. Although the NCs used to be saved for courses in medicine, law, biology, dentistry, pharmacology, psychology and business administration, nowadays, it is applied across the board and more universities are introducing it.

According to a report released by the Centrum für Hochschulentwicklung (CHE), more courses in the Universities have limits.

In Hamburg for example, 92% of the Mathematical and Scientific study courses had an NC in the last Fall Semester. In Baden-Württemberg, the engineers have it touh with 65% of the courses having NCs. NRW and Bayern are much better with only 40% of courses having NCs.

Although NRW generally has low numbers, individual Universities have a different plan: 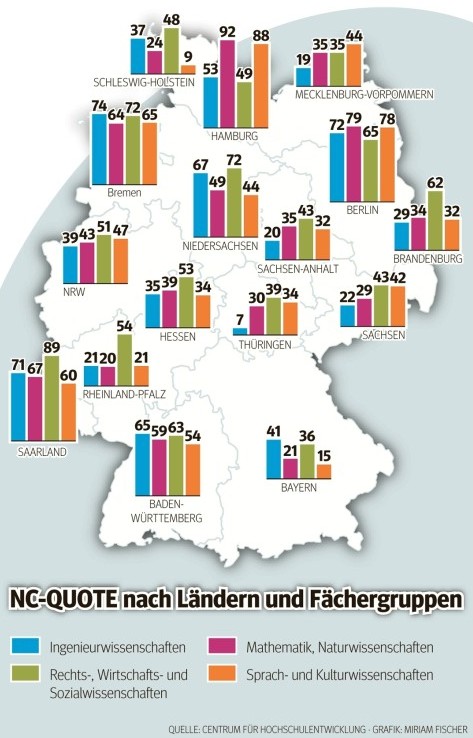 Less than 50% of Students in German Universities Graduate

Why do Foreign Students choose Germany and Would they Recommend it to Others?

States/Cities Offering the Best Job Chances for Graduates in Germany