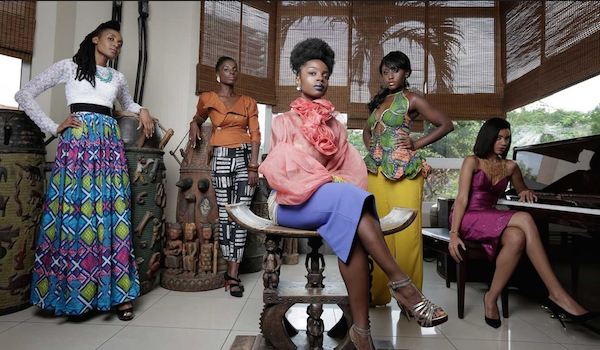 It’s time we tell our own stories our own way. Here’s a new one for the returnees. Introducing, An African City, the hottest show in town.

If you like nothing else in this web series, then at least watch it for the fashion, the music and the natural hairstyles.

It’s funny, while still discussing major issues that affect returnees. The lucky ones who return with a job, those with connection and the majority who return with qualifications but without connections nor a signed job contract. And the dating scene, chale……

Summary: The story revolves around five young ladies who’ve lived abroad all their lives and have now returned back to the continent. They are all based in Ghana though they originally come from other countries.

Catch the first three episodes below. Subscribe to their Youtube Channel to catch a new episode  every Sunday here. Read about the creators and new plans for the show on their site here. Here’s the cast, further down are the episodes:

Ngozi (Esosa. E), a Nigerian and the youngest of the five ladies, was raised in Maryland. After earning her graduate degree in international affairs, she was offered a job at a development agency in Accra. Much to the dismay of her friends, Ngozi is the religious one of the group.

Zainab, (Maame Adjei) a Ghanaian born in Sierra Leone, grew up in Atlanta. Her entrepreneurial spirit brought her back to Ghana and she has a constant eye for business opportunities.

Nana Yaa (MaameYaa Boafo) a Ghanaian, was raised in New York state, just outside New York City. She returned to Ghana after earning her first degree at Georgetown University and her graduate degree in journalism from Columbia University.

Sade (Nana Mensah) a Ghanaian-Nigerian raised in Texas, works as a marketing manager for a prominent Nigerian Bank based in Accra. She is a graduate of Harvard Business School and spent most of her young professional life between New York and Boston.

Makena ( Marie Humbert) was born in Kenya, but spent most of her life in London. She is from a biracial family, with a Ghanaian mother and a British father. In England, she graduated from Oxford Law and went on to have a successful career at a corporate law firm. However, after a divorce, she decided to return to the continent jobless.

Episode 8 – An ODE to Saturdays

Episode 6 – He Facebooked me

Kenyan Acrobats Performing at the Apollo in Düsseldorf