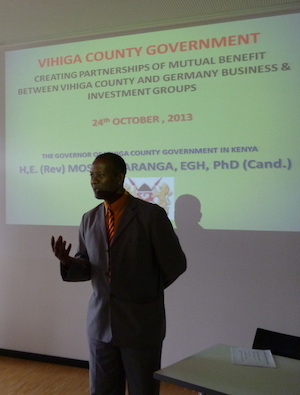 According to news reports, the Governor of Vihiga County, Mr. Moses Akaranga has set up an “embassy” for his County in Germany.

According to the appointment letter released to the media, the appointee Mr. Fanuel Muhandale Kea was appointed as the International and Local Investment Liaison Officer and not as Ambassador as reported by most media houses. The Ministry of Foreign affairs confirmed they weren’t informed of the appointment but had heard about it. 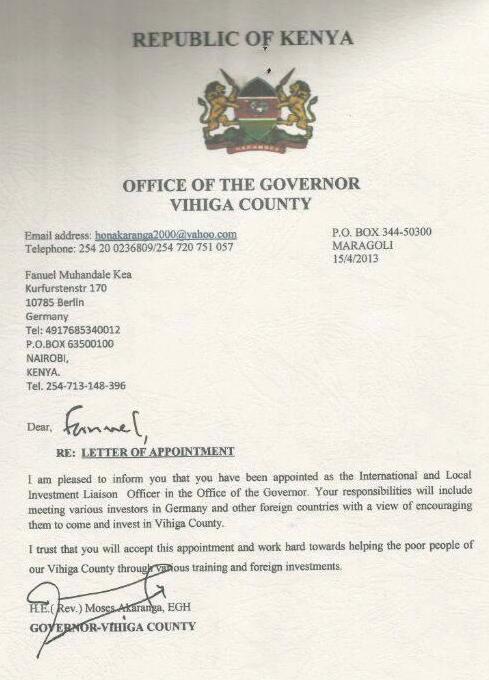 Mr. Kea spoke to KTN in an interview and confirmed that he had spoken to the Kenyan ambassador in Germany and the Embassy was aware of his existence. More to that, he added that the Embassy in Berlin wasn’t cooperative and had refused to work with him.

The Governor’s office stated that Mr. Kea was simply an officer and the county hadn’t set up any office, but Mr. Kea in his interview said that he was in the process of acquiring office space and setting up an office. Currently, Mr. Kea operates less than 2km, i.e. at 1,3km from the Kenyan Embassy in Berlin.

The Ministry of Foreign Affairs in Nairobi sent a confidential letter to the Solicitor General and Comptroller of Budget requesting for regulation and coordination of county representatives travelling abroad so as to maintain the Kenyan image and enhance cooperation and investments. The Ministry also sited that most of these delegations were too large and travelled without informing the Kenyan missions and Embassies abroad.

What the EU-Africa Free Trade Area Means to Africans