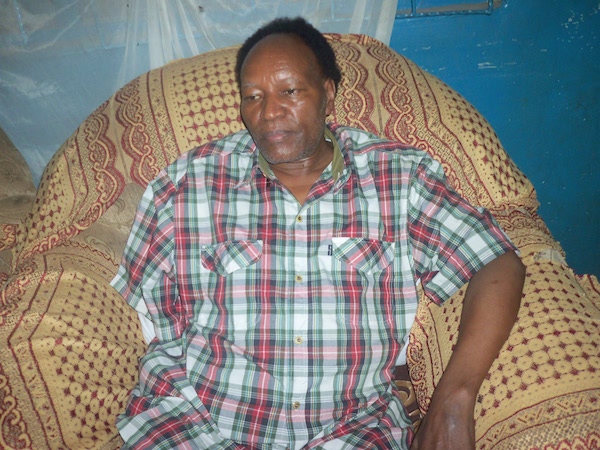 I received this email seeking for help from the Kenyan community in Germany. Read it and make your judgement. Below is the lady’s contact incase you wish to help or get further details from her or from the surgeon.

DISCLAIMER: It remains at your discretion to determine the sincerity and ingenuity of the story.

My name is Charity Wambui Muriuki,30yrs old from Umoja 1,the first born daughter of Mr.John Muriuki.The family of Mr Muriuki have a medical appeal need we would like you to help pay up.On 11th Oct.2013,my dad Mr Muriuki had hired a personal car,as he always did while he wants to travel up country in Nyeri,central province.His mission was to take our grandmother,His mother to Karen Hospital Karatina Branch,to see a heart specialist since that is where shes’ normally attended to.They decide to come back to Nairobi though darkness had already set in.His coming back journey will forever be engraved in his mind because on reaching Makuyu near kakuzi area he was hit by a swerving lorry at high speed on his right hand side of the door trying to escape it.The impact was so strong that the car was pushed 50m from the scene of the accident.Police nearby came and saved my dad by rushing him to Makuyu Makutano hospital for first aid.Since the injury to his right hand was severe,he was rushed to Thika General Hospital for treatment,same thing there they do not have a night resident doctor to attend to him so they call home and ask us to come take our patient to a better hospital.That is when my mum organized transport and that was around mid night,because the accident happened at around 9.30pm. My mum and my sister and my my dads friend, the owner of the car travel to Thika General Hospital and find my dad in a bad and pitiful condition blood all over his clothes and on a drip on the hospital bed.My grandmother meanwhile in a nearby bed in a state of shock but not injured at all.Not wasting time at all he is taken into the car and they rush him to Mater Hospital.

My grand mother is taken in by an uncle my dads brother who lives in Thika who had been called in while they arrived at the Thika General.At Mater they had to part with Ksh. 75,000 for him to receive any service that night and remember  its 3am in the night.My Dad’s ATM card was swiped and he had Ksh.40,000 so my mum and sister had to go back to umoja and organize to get Ksh. 35,000 so that my dad could be operated on.After Mater hospital had examined him they found he had multiple fractures and needed an operation soon.When my mum got the money,they sent it to the hospital and the surgery went on.His surgeon Dr.Afulo tried to save his hand which was severely hurt but two days afterwards,the hand was rotting away.A strong odour could be felt in his ward room and the ultimate decision was to amputate.They told us vividly that the hand hand had become septic and was becoming a threat to his health.Not for getting the bill began to rise from day 1 in hospital.After amputation,which was the second surgery,we were told he would have to undergo the last surgery to stitch the wound not withstanding the bill have already rose to over 600k and he had stayed in hospital for like 2wks.We began getting worried about it and we organize a mini fundraiser so that we begin to reduce the amount in debt.The fundraiser gives us around Ksh.200,000 and we pay to the hospital.But the bills keep on rising because he is still being treated and they are also managing his Diabetic condition.

Finally after 27Days in Hospital,bills had already reached a whooping 1.14m but through concerted efforts here and there,we had already paid over Ksh.300,000 and the remaining balance is Ksh.706,850 that we owe the Hospital.N ow this is the borne of contention and that is where we want you to come in is that we had to part with my Dads 0.8 Ha piece of land Title Deed,which my dad had acquired when he retired from ICDC ,where he worked as a driver for 30yrs.Right now our 2mnths grace period we had agreed with the hospital so that they could release him from hospital have elapsed and they want their money lest they auction the piece of land to recover their monies.We are stranded mostly stressed because all our efforts we have put into it are failing.We have even tried to get our local media to cover our story on either radio or Tv and in vain.I do not know if people pay to be on TV or what because all TV stations have refused to cover the medical appeal.Then owner of the car which my dad had hired took his vehicle from makuyu police station and we have never had from him.The lorry which belongs to Kindaruma Ltd,a company we have never heard of,also used bribes to get his vehicle out from the police station the day after the accident and we have no idea how to trace them even for compensation.Our family has been left without anyone to support us but well wishers.

We want to appeal to you mkenya ujerumani  to take a look at this appeal and the supporting documents attached and get back to us if it is possible for you to come in and save the day by clearing the underlying bill and even catering for his weekly amount of money that he spends for dressing of the wound and Diabetics checkups he attends at Mater Buruburu Hospital,which amount to Ksh.10,000.

This is the contact of his doctor Dr.Afulo 0722798983 orthopedic surgeon at Kenyatta National Hospital.

Ten Most Toxic Places on Earth – Three from Africa