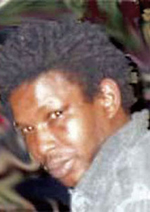 Oury Jalloh was an asylum seeker from Sierra Leone living in Dessau in Germany where he burned to death while  his hands and feet were chained to a fireproof mattress in a tiled cell in a police station in 2005. On the fateful night when he died, he had been arrested by the police. According to the police, he was intoxicated and under the influence of alcohol and cocaine when he harassed some girls outside a club before his arrest. The police gave a shoddy story about his death, claiming that he had set himself on fire and died from heat shock.

So many points didn’t add up according to the police’s version of the story: Why did the police turn off the smoke alarms? How could Jalloh have physically burned himself? Why were hallway cameras turned away from his cell door, why did CCTV footage get erased, why do no officers seem to remember the events of the day? How could a man, lying on his back with hands tied to the ground on both sides, have set fire to a mattress with an anti-inflammable coating, they ask. How was he able to hide the lighter behind his back afterwards? And how come no one spotted the lighter when he was strip-searched earlier that evening?

In 2008, a trial against two police officers ended inconclusively due to lack of evidence. A second trial in 2012 led to one of the officers,
Andreas S, being handed a €10,800 fine for involuntary manslaughter. He admitted having turned down the intercom and switched off the fire alarm when it went off.

On Tuesday (12th Nov 2013), members of the In Memory of  Oury Jalloh initiative presented new evidence, which they say disproves the theory that Jalloh could have set the fire himself. The report suggests that the kind of burns found on the site of Jalloh’s death could only have been caused by the use of additional fire accelerants such as petrol or lighter fluid. Maksim Smirnou, a certified arson investigator based in Ireland, has conducted a series of tests recreating the conditions inside the cell.

There are allegations that authorities attempted to mislead investigations or cover up the affair entirely. The lighter found under Jalloh’s body was not on the original list of items found at the crime scene. A video of the burnt-out cell filmed two hours after the end of the fire abruptly cuts off after just four minutes – supposedly because of a power cut – and thus doesn’t show whether the lighter really was under the dead man’s body. An analysis of the melted lighter has shown that it contained neither traces of the mattress nor of Jalloh’s clothes or body.

In 2007 a leak revealed that the head of policing in Dessau was trying to slow down the work of three officers looking into crimes with a rightwing motive, supposedly because it was damaging to the reputation of the region. Saxony-Anhalt, where Dessau is located, has the highest rate of violent crimes with a rightwing motive in Germany, despite the fact that it also has the lowest percentage of foreign-born residents (1.9%).

One of Oury Jalloh’s best friends is Mouctar Bah. Bah, who leads the Initiative in Remembrance of Oury Jalloh e.V., played a critical role in 2007 in bringing Jalloh’s parents from Sierra Leone to add themselves to the state lawsuit against the police, informing the German community about the murky circumstances of Jalloh’s death, and supporting the 2008 appeal of the acquittal verdict in the first trial. His energy and social advocacy over the last few years has earned him a Carl-von-Ossietzky human rights medal from the International Human Rights League in Berlin. This advocacy has also earned him a significant backlash from the police in Dessau, where he lives. His licence to run an internet café was revoked and reinstated only after a number of years of fighting. On a trial date in August, when Bah spoke out of turn in the courtroom, police physically removed him from the court and forced him onto the ground, injuring his arm to the point where he needed medical care. At the peaceful demonstration last Saturday, Bah, who generally displays impressive patience and calmness, was pepper-sprayed and beaten unconscious by police officers-and had to be admitted in hospital for close to a month.

Police also attempted to suppress the free speech of protestors. In 2011, they issued a memorandum that called for closer regulation of members of the Initiative, characterising them as trouble-makers. Immediately thereafter, they instituted identity checks at the courthouse for this public trial, setting up a photocopier at the door to take copies of identity cards and passports. Before the demonstration held in 2012, police visited Bah in his internet café and informed him that if he or other activists used the seven-year-used campaign slogan ‘Oury Jaloh – that was murder!’, they would be brought up on criminal charges. Legal advisors believe that such criminal defamation charges would not actually stand up in court, and in 2006, the regional administrative court of Sachsen-Anhalt issued a decision that forbidding the slogan would violate the free speech of protestors. Nevertheless, the police tried, for an hour, to prevent the demonstration on the grounds that the slogan was criminal, ripping signs and banners from the hands of the activists and standing in their way. This intimidation certainly illustrates the competing interests of some officers in a trial that is clearly already a stain on the region and its respect for due process.

Below is a video of burned up Oury at the police cell. WARNING: The video is very very disturbing, avoid watching the video in the presence of children.