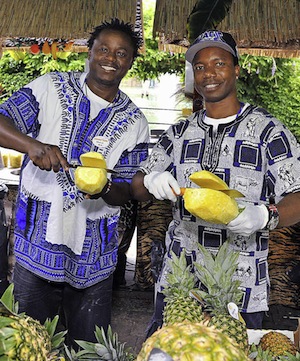 Mbaruk Gude and Mike Jela two Kenyans who originally come from Vipingo on the Coastal Province of Kenya were recently spotted caring out pineapples to help out children from their home town. An action that they have been running for years. They carve out pineapples and teach clients how to do it at home, those who buy the pineapples contribute to the Vipingo Verein as part of their income goes to their organisation.

There’s a long history behind how they got to doing what they do. In 1999 as Baba sold wooden carvings and gave tours on the Kenyan coast, he met a German couple, Doris und Karl Eberhardt. The couple impressed by his German which he’d learnt at the Goethe Institute in Mombasa, became very close with him during their trip. Before they left, they gave him their address and insisted that if he ever visited Germany, he’d get in touch with them little did they know, he’d come to Germany less than a year later.

When Baba arrived in Germany, he got in touch with the couple and they offered him a job at their supermarket. As he worked at the supermarket arranging and organising products on the shelves, he noticed that most customers avoided buying the exotic fruits that he knew so well from Kenya. On asking, most would tell him they weren’t sure how they’d serve or prepare the fruits thus their avoidance.

Having identified a niche, he’d set up a stand next to the fruits’ aisle and demonstrate how to peel, prepare and serve most of these fruits he knew so well from Kenya from coconuts, pawpaws and pineapples. He currently works on at least 3400 a week.

In 2006, they started the Vipingo Verein that has helped set up a Montessori school in Vipingo that not only offers education but food, clothing and boarding to its students. The verein currently has 85 members which include individuals, companies and organizations in the area that help contribute and collect contributions for the project.