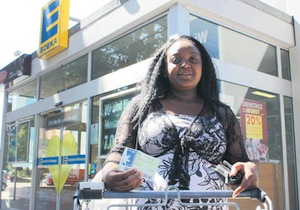 Mary Karanja a 24 year old asylum seeker was recently shopping at an Edeka in Hannover, her receipt reads €6.98. Unfortunately, she doesn’t have cash money to pay for the shopping but a €10 coupon. On handing it to the cashier, she doesn’t get any change.

As an asylum seeker, Mary receives €354 as an allowance, of this €186 is given in form of coupons. According to the company that issues the coupons, to avoid asylum seekers from getting money and using it for other things the cashier is allowed to only return 10% of the coupon value, in this case €1, but even that wasn’t paid out to Mary.

It was discovered that some supermarkets do not give back change to the clients. A worker at the Edeka remarked that, “they didn’t even have to accept the coupons, so the asylum seekers should appreciate the fact that they can use the fact they can use the coupons there instead of complaining about the change”. But the spokesman of the company that issues the coupons sees it differently arguing that, “if a company agrees to accept the coupons, they should also play according to the rules”.

According to the Edeka spokesman in Hannover, all Edekas were asked to pay out the 10% as required but whether or not the single Edekas will accept depends on the owner of the individual supermarket.

Last year saw another Kenyan asylum seeker organize a demonstration against the coupons, Kenyan complains against the Coupons.