I was migrating data today and I ran into some material I had written forever ago during my internship (read about the internship here).  I decided to share some of those things I wrote then. They are very inspiring. I like reading stuff I wrote when I was “younger”, it’s amazing how a young soul can be fuller of life and hope than an older one. Now I know why we are advised to be like little children, so innocent and full of limitless opportunities, looking at the world as your oyster. So here is one of those articles, enjoy….. 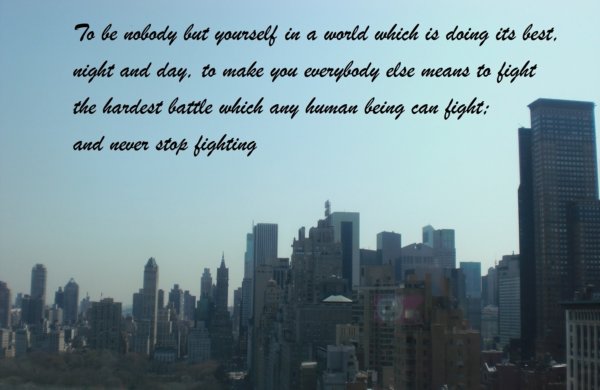 Recently I ran to catch the subway to work and when I got there, there were so many people waiting for it according to the timing board, the next one would be there in 2 mins. When the first one finally got there everyone shoved and pushed trying to get into the subway, I got in and got my tiny position that was so uncomfortable but I continued to hold on and the doors shut. The next subway was to come in the next 2 minutes but still everyone struggled to get into the full one, the driver tried to beg the people to take the next subway but no one was listening to him. I finally got to my stop and after walking for a few minutes, the subway that was behind us drove by and it was completely empty.
As I walked to the office, I thought more about this and laughed. This happens everyday in life, look on the streets: 40yr olds dressed like teenagers; young girls wearing painfully high heels till they start bending their knees trying to bear the pain of beauty, everyday when we force ourselves to fit into tiny clothes that don’t fit, but hey we want to look like Beyoncé right? How many times do we prefer to enter the full subway that’s very uncomfortable rather than be left behind and wait for the next one?
Many are the times we compromise our comfort (like I did squeezed in that subway) and even our values so as to fit in with the others, is it worth it? Some of us have decided to forget our hobbies and dreams in the name of fitting in. You may think it is cool to hang out with the cool crowd but many are the times that that cool crowd doesn’t help you. If you have friends who do not care if you are following your dreams neither do they help you to achieve more in your life then they are not the people you should be hanging out with. Some may call you proud for putting yourself first and deciding to follow your dreams instead of being “cool”, but you have only one life to live, better live it well.
The funny thing is that many of those times that we squeeze ourselves trying to fit in, those who are comfortably seated in the subway don’t even notice you uncomfortably squeezed at the door holding on to dear life. You may be trying so hard to look like someone else but they don’t even notice; you might have forsaken your dreams and even sometimes your friends to be with someone or to do something that is not for you. The question remains is it worth it?
If your answer is no, then you need a vacation from those activities or people. Take sometime and think about it. Decide what is more important getting to the destination or enjoying the ride. Sometimes you are even in the wrong subway to begin with, it might be comfortable and you may be enjoying the ride but that’s not the direction you are heading.
I took the same subway a couple of days back but in the opposite direction, it had enough seats, it was comfortable and quiet with no kids (schools were back in session and we all know what a nightmare taking the early subway is). I read my book enjoying the ride till, I realized I didn’t notice any of the buildings and it hit me, I was going south instead of north.
We all fear being left behind but sometimes it’s the best thing that could happen to us. Don’t forget though to analyse your subway well coz sometimes, taking the first one might turn out to be more fulfilling than waiting for the next one. As Robert Kiyosaki said in his book Retire Young Retire Rich, “You better kiss a couple of frogs to find your prince or you’ll end up marrying a toad.”
Share with friends:

Career Fair in Nairobi with Mkenya

How good is your German?

11 Unpleasant Truths About Studying at a German University