Having your visa denied is something we all dread, but having it denied seven times beats logic. The journey for Dr. Onyinzo to Deutschland took seven visa application trials to materialize, but it was all worth it he says.

A trained and qualified medical doctor, Onyinzo completed his studies in 2013 at the Moi University Eldoret and took an internship in Kitui. Later, he would move to Afya Centre waiting for an appointment that never came.

It was during this wait that he heard of the European Campus Rottal-Inn Pfarrkirchen’s plans to open a new campus in Deggendorf. The new campus was to offer a new course in Medical-Informatics: Telemedicine, a very new field- unchartered territory. Weighing between waiting around for the posting that might never come and the adventure of advancing his studies in this new field, he chose the latter. Though the German Embassy seems to have had other plans for him.

His visa applications were rejected seven times. The justification for visa denials was lack of sufficient funding and lack of proof of family roots. Essentially, just being a young unmarried Kenyan student. Even after he managed to secure sufficient funds in his account, he was still denied and together with his wife who was then a fiancée, they considered to appeal, but the cost proved to be hefty.

Yet his undying determination kept him reapplying and he eventually got it. 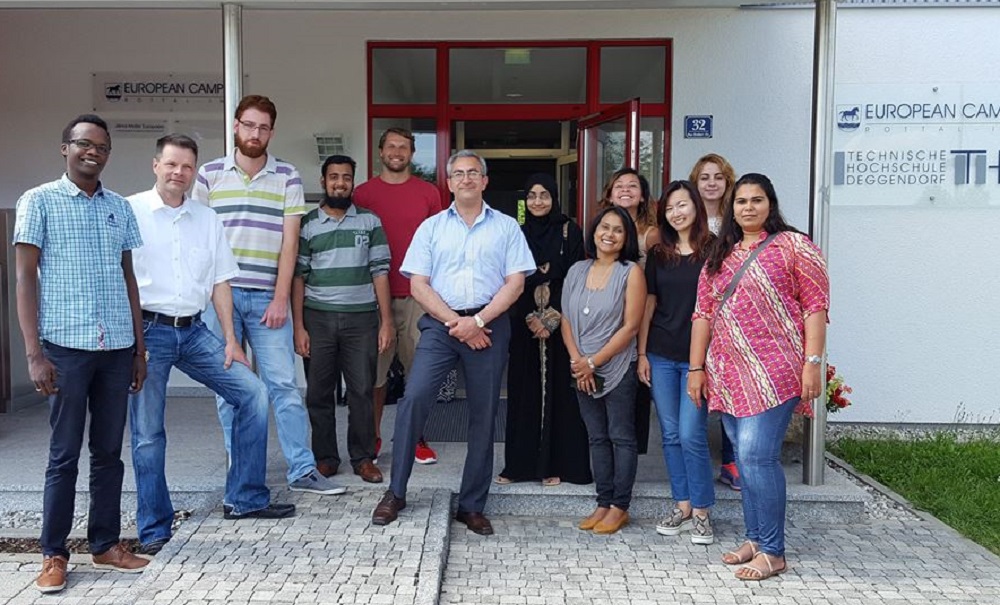 Dr. Onyinzo joined the European University in Pfarrkirchen as one of only four students in the medical Informatics class. In March, he presented his Master’s thesis on “Knowledge and Attitudes of Kenyan Physicians to Telemedicine, eHealth and Medical Informatics” and with that became the first student to graduate from the University.

He describes his time at the European University in Pfarrkirchen as an impressive experience in which he was able to make many valuable social and professional contacts.

“Sometimes I miss talking Kiswahili. In the first few months, I couldn’t go to the supermarket alone, I would go to the bar and have no one speaking to me, I quickly noticed that coming from a sociable African culture, here people were more reserved.” He narrates.

He is currently doing his hospitalisation in System Diagnostics and therapeutics at the Hospital in Trostberg. In May, he is expected to sit for yet another exam as evidence that he has the necessary knowledge of the German language for practicing the profession. Among other things, this serves as a prerequisite for being allowed to practice his profession as a doctor in Germany.

Coming to study was the best decision he made, he adds. Living in Germany, he has learned to adapt to the routine, study and life demands and now appreciates cultural exchanges and new things he keeps on learning.

But of all his adventures in Germany, Onyinzo’s greatest experience and happiness is with his wife Christine. They stood strong, even when the visa was being denied. Samuel met the love of his life in Eldoret, when she travelled to Kenya for a German Research Project. They lived together in Kenya for two and half years before relocating to Germany, where they lived for another two and half years before eventually deciding to tie the knot in December 2016. The couple lives together in Mühldorf Am Inn in the heart of Bavaria, a small back village community in Lower Bavaria (Nieder Bayern), where meeting a black person on the street is considered a profound occasion.

And for those looking to move to Germany, he advises to learn German; have a clear purpose and objectives and always maintain connections with families left behind.