The 2013 PISA results have been out for quite a while and most researchers are busy analysing the results and what they could mean to the society. Of course for me what matters most are the results regarding foreigners and the girl child. Regardless of origin, the girls perform worse than boys. This goes to show that even with the progress made, for some reason girls still have problems in problem solving. What is encouraging though is that the difference in the average is a very very small number (7), thus isn’t anything to be alarmed about. This is a plus point for Germany for having breached that difference. Where the alarms go off is the difference between foreigners and the natives. (Yeah yeah, they call them people with migration background, but that term might be politically correct but too long for my article.) The difference between the two groups is 50 points. That’s a huge number.

I tend to think as foreigners in Germany, we tend to live in Germany with habits from back home. I’ll refer to the Kenyans/Africans, it might be different for other nationalities. First most of us believe that the German education system, by virtue of being “white” is automatically better than the Kenyan system. Secondly, we assume that education should solely be handled by teachers. 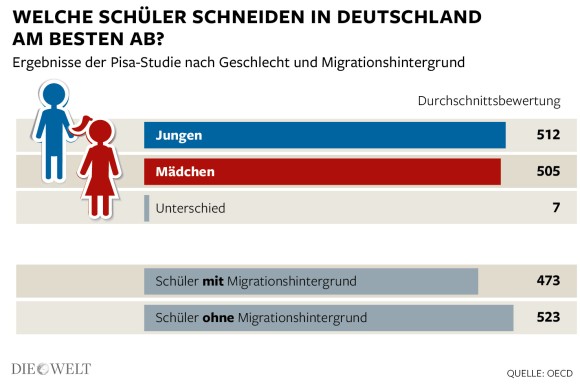 These two are the basis of our problem. The German system is built on the assumption that a parent and the teachers work together, progressively until the child reaches a point to make their own decisions. Unlike back home where the kids are in school from 7am until 5pm and the teachers do everything, in Germany kids aren’t in school everyday and even the days when they do go to school it’s not a full day. If you are lucky, a child finds a teacher who cares enough and nurtures that child, and advices with the correct advice. If you are unlucky, you find a nazi teacher who can’t stand your foreign child. Now in these two scenarios, if a parent is completely out of the equation, then the child is left at the mercy of the teacher. But if a parent comes in, regardless of what kind of teacher you get, the parent is the “middleman”.

The parent should stand in between, if the teacher is a terrorist they should know the parent is watching, if the teacher is caring their know the parent is a partner in this. The child also gets a cheerleader, encourager and knows their parent has their back and in case they need anything to succeed they can ask their parents. As foreign parents, it is time we get involved. I know some of us are afraid because our German isn’t the best but that shouldn’t hold you back from getting involved in your child’s future. There are organisations that accompany parents to their children’s school to translate, use them. GET INVOLVED!!!!